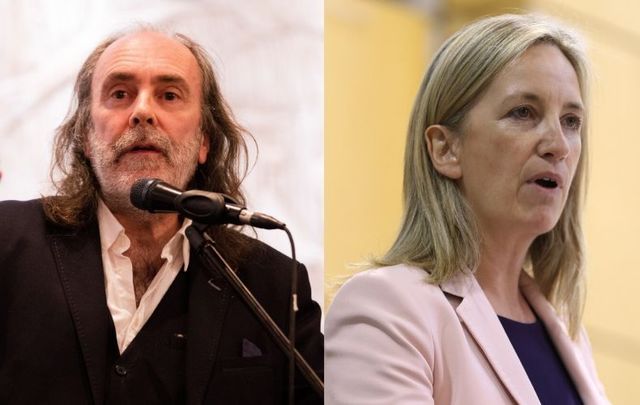 Read More: COVID-19 prompting some anti-vaxxers to reconsider their opposition

The pair had earlier tried to launch a High Court challenge against the national lockdown issued by the State in response to the COVID-19 pandemic.

But now critics say their protest has endangered their lives and the lives of all those who encounter them.

If you have the misfortune to live with any of these gobshites, lock the doors NOW before they get home. https://t.co/HXy26DTHxq

O'Doherty, a former Irish Independent journalist, told the press that she believes COVID-19 is "no threat to life," in contradiction of the global medical consensus.

A day before their protest, a total of 77 COVID-19 related deaths were reported in the Republic of Ireland, the highest figure recorded in a single day since the outbreak began in the country, according to the Irish Department of Health.

Nevertheless, inspired by the astroturf protests held by Trump supporters in the US, the group Irish assembled in the middle of a lockdown in Dublin to protest what they called the unconstitutional stay at home order.

Assorted conspiracy theorists and racists cram into the Four Courts this morning to pay homage to John Waters an Gemma O’Doherty.

You can send them your best wishes in 10 days time at their local ICU wards. pic.twitter.com/didLyl1Icq

A spokesperson for Ireland's Court Service slammed the protest, saying they're “disappointed and appalled that people chose, or organised ... to attend in large numbers, despite not being required to be there – and thus endangered themselves, gardaí, court staff, and court users to infection.”

Nicknamed Germa O'Doherty by punsters on Twitter, last week she caused controversy when she blasted Dublin Airport for allegedly not screening people coming into Ireland (it's only other people who should take precautions over COVID-19 apparently, not O'Doherty or her supporters).

At the time the Dublin Airport Twitter account was quick to demolish every one of her false charges, concluding with the following:

One of the few businesses that seems to operating as usual, is your business of peddling untruths.

But unhinged assemblies in the middle of a viral outbreak are beyond a joke.

It can feel a bit like a death, or more precisely like a body snatch episode. Vulnerable people are easy targets for this kind of digital siren call. It always starts innocently enough. They can catch a YouTube video or a Facebook post that seems to provide simple answers to the intractable problems of modern life and they can reach for them like a lifebuoy.

It all starts off innocently enough too. A link will appear on your Facebook page or in a WhatsApp chat that "questions the prevailing thinking" about some hot topic.

But soon you can vanish down a globalist or chem-trail rabbit hole until you end up isolating yourself from your friends and your community in an increasingly paranoid and cult-like trance.

There are some who would argue that is precisely what has happened to both Waters and O'Doherty, but they are far from alone in their endless suspicions.

It’s as if some people get possessed by a global conspiracy. Indeed in conspiracy theory circles themselves, this process is called getting red-pilled (a red pill is what you take to finally wake you up, Matrix-style, to WHATS REALLY GOING ON).

The process has certain common rites of passage. It can begin with a claim that they're "only asking questions." Sometimes they're even asking good questions. Why they want to know quite reasonably, are we all cowering indoors from this unseen virus?

The flu kills hundreds of thousands of people each year they argue, so why are we not in lockdown from that too?

The answer is in the name of the "novel coronavirus" itself, it's a new pandemic we don't have any defenses against. No vaccines, no flu shots, no understanding of how precisely it's transmitted or what it can ultimately do to us, and no real way to fight back against it yet.

Most people would accept that rather stark explanation, seeing the proof it all around them. But conspiracy theorists worry that the virus was planned in a laboratory and that it's all the work of Bill Soros or Bill Gates or the CDC or the WHO or shady globalists or the gay agenda, who have created this unstoppable virus to kill millions and somehow enrich themselves.

Because that's the only way this crisis makes sense to them. Someone has to be the bad guy and someone has to wake up and stop them.

The internet is full of these swiveled-eyed lunatics waiting to lead you down a dangerous path into paranoia, suspicion, and obsession. The trick is not to fall for it.

But in these uncertain times, more and more Irish people are falling for it. So it's time we all had a serious discussion about the Facebook and YouTube and WhatsApp and Twitter platforms that are facilitating these relentless and worldwide misinformation campaigns, before one of our neighbors becomes a ranting online activist destroying their peace - and ours too.

they’re about to liberate themselves from this life https://t.co/6452EMxUBq