If you want to know where the great change happened in Irish life and politics, you could start in 1985 in Ballinspittle. 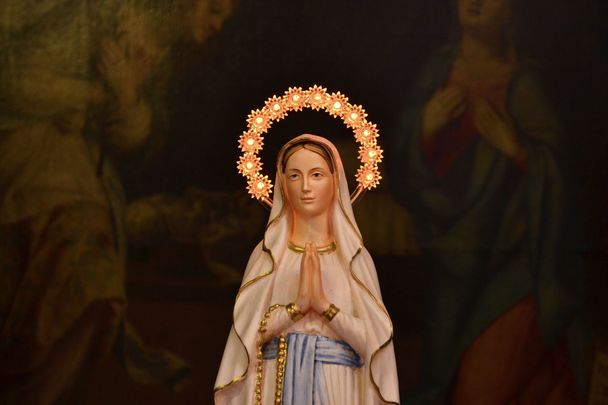 Marian apparitions in Ireland share some interesting things in common.

In 2019 there was a surprise when a story broke about an antique shop in Tralee, County Kerry. A  steady stream of Catholic devotees was arriving to peer at an old mahogany cabinet, one with a big wood stain on the front that bore a “striking resemblance” to the Virgin Mary, observers claimed.

Soon they were blessing themselves and rubbing holy medals against it, as the otherwise ordinary piece of furniture became "a point of pilgrimage" for believers.

At an antique shop in Tralee an old cabinet bearing a “striking resemblance” to the Virgin Mary is drawing devotees into the store, blessing themselves and rubbing holy medals against it - as the otherwise ordinary furniture piece becomes a point of pilgrimage for believers. pic.twitter.com/Q6tMFMIVSa

How could this still be happening in 2019, some commentators groused? The answer may be found in our endless white-knuckle news cycle.

Think about it. In Ireland visions, pilgrimages and apparitions seem to occur most in unlikely or overlooked and isolated places, places so remote that they telegraph their own modesty. Another common feature is that they tend to happen at times of great economic and political strife.

What are we to make of this?

Could it be that at times of growing social anxiety, the most religious among us look up to the sky for a clarifying vision?

Is that all it is?

Is it just anxious people looking for a sign we're not alone in the universe, that our suffering might mean something, that an all-powerful being is looking out for us, all 7.3 billion of us? Simultaneously? All the time?

Like a lot of Irish people the first time I ever had reason to contemplate an apparition of the Virgin Mary was at Knock Shrine and Basilica in County Mayo.

If the Virgin Mary hadn't appeared there in 1879 there would have been little enough to recommend the place, I discovered. A hundred-foot march told me that it was basically one street backing onto bogland, and about as far from the bright lights as it was possible to be.

The year was 1979, exactly one hundred years after the original apparition,  and I had arrived in Knock with about two dozen other boy scouts for Pope John Paul's historic visit.

It was apparitions that had put Knock on the map and that day I was there with the Catholic Boy Scouts of Ireland (CBSI), although I was the least religious one they may ever have inducted.

Looking around at the thronging crowds, young as I was, I could discern that oddly Irish mix of piety and contempt in the faces of so many of my elders. Holiness, for most of them, seemed to share a zipcode with despair.

Being from Donegal, and known to no one, we were not welcomed to the inner sanctums, so instead our troop leaders led us toward a sort of wilderness half overlooking the Basilica – where an old stone wall blocked our way if you sat down the view vanished if you stood up it reappeared.

“This is where they saw Our Lady,” our troop leader assured us earlier, pointing to a tall whitewashed wall on one side of the original church and then shrugging.

That shrug said maybe it happened, maybe it was all a cod, use your own discretion boys. For a CBSI leader, he was quite a herald of things to come.

Back to the apparitions: it was a dark and stormy night in 1879, they say. Two Mary's, twenty-six-year-old Mary Berine and Mary McLoughlin of unknown vintage, who was also the priest's housekeeper, were the first to come across the startling site. It was lashing rain.

It's largely forgotten now but 1879 was a potato blight year, one of the worst since 1847, which was still within living memory. Anxiety was the lifeblood of the people obviously. Maybe they were already looking for a sign.

Anyway, a few feet off the ground, on the parish's gable wall, the two Mary's beheld the Virgin Mary, St Joseph, St John the Evangelist, and a little lamb standing on an altar before a cross.

It was the Piccadilly Circus of Marian apparitions. What they were all doing there, why they had come, was anyone's guess. They stood motionless and did not speak then or ever. One witness, a woman in her 70s named Bridget Trench Jr, was quite overwhelmed:

“When I arrived there I saw distinctly the three figures, I threw myself on my knees and exclaimed: 'A hundred thousands thanks to God and to the glorious Virgin that has given us this manifestation.'"

That's some enviable off the cuff rhetoric, isn't it?

She continued: “I went in immediately to kiss, as I thought, the feet of the Blessed Virgin, but I felt nothing in the embrace but the wall.”

But that's a bit on the nose, isn't it? The weird mix of ethereal rapture and hard concrete wall? It speaks to the gulf between the extraordinary event and the homespun place.

Some skeptics have claimed there is a letter in the Tuam diocesan archive from a Michael McConnell from Belfast, a man who vowed that his friend Constable McDermott, who had been stationed at Knock, had told him the apparition had actually been produced with a magic lantern that was operated by a policeman stationed at Knock. A protestant policeman. This seems important information, if true.

At all events, it's 40 years now since John Paul's visit. It's 140 since the locals had their startling vision.

Knock nowadays is still just one street backing onto fields and bog, but the now main street is a festival of gift shops offering miraculous medals, blessed candles, wooly hats, mangers, holy water bottles, and other religious souvenirs. They seem to be doing a roaring trade.

But it can't all be just smoke and mirrors. Hundreds claim to have been cured of serious medical afflictions there whilst visiting the shrine. Is it the power of prayer or the placebo of hope? No one can really say. I doubt if they ever will.

By the mid-1980s I had become a teenager and this time the holy statues were starting to move in a town called, of all things, Ballinspittle. Once again, it was a nowheresville, a Ballinspit and you'd miss it hamlet. Once again it was being singled out for extraordinary miracles.

But I had no patience for it, nor did any of my anxious teenage peers, having reached maturity in a viciously rigged economy that worked for the few and exported the many.

But we didn't dare mock the need for transcendence in daily life, we just didn't think it made a good trade-off for a diet of recession and emigration.

So if you want to know where the great change happened in Irish life, you could start in 1985 in Ballinspittle.