My first post-pandemic escape to Provincetown

Having survived the plague and that little season of hell we all went through, Cahir O'Doherty was aching to return to the place where his heart has felt lightest. 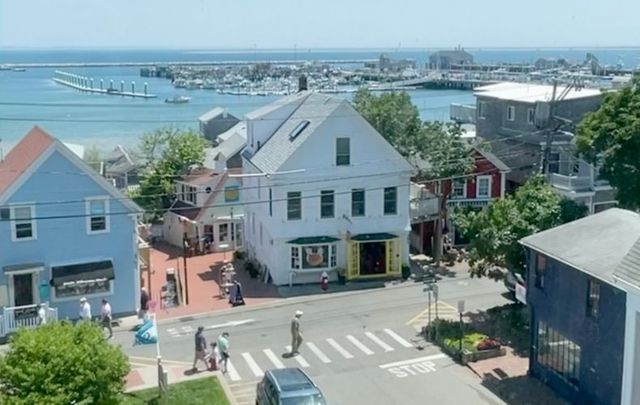 Some things never change: the blue wash of the morning light in Provincetown, Massachusetts for one. Turn a corner and you're in an Edward Hopper painting.

That matchless Cape Cod light - with the wide bay on one side and the Atlantic on the other - can take your breath away, if you're the sort of person who responds to finding yourself inside a living painting (and most people who live there clearly are).

Having survived the plague and that little season of hell we all went through (wasn't it awful?) I was aching to return to the place where my heart has felt lightest.

It's not human nature to stay locked inside your home, month after month, fearing every spore that passes, or living in what the Provincetown drag legend Dina Martina calls “emotionally distanced” bubbles, unable to see the people you love.

I returned this June because Provincetown is known for its power to quietly change or heal people. Irish American master dramatist Eugene O'Neill arrived there for his transformative summer of 1916 for example, and later other visionary dramatists like Tennessee Williams and Tony Kushner would fall under its spell. 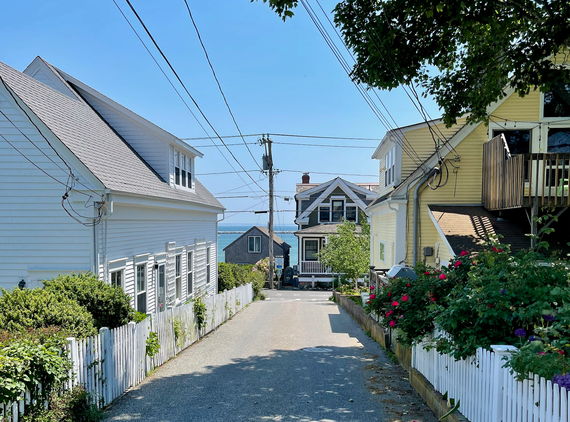 You can see why. Provincetown is famous for the welcome that remote spots can offer to the marginalized, and for the daily opportunities to explore its natural wonders that stretch from a gentle paddle or a swim in Herring Cove bay to a full-on adventure holiday in the otherworldly wilderness of the dunes (depending on your mood).

Like a lot of people, the pandemic had put me in a bind. For a year now I have been treated for some post-Covid symptoms that require major medication and rest between intense bouts of my usual activity. So I wondered if it was safe for me to travel at all yet, and if the risks were greater than the rewards?

Ireland at the start of June Ireland was not yet a possibility, so I looked for an escape that was somewhere closer to hand, somewhere well known. Fully vaccinated and double-masked, I decided that if I was ever going to meet the world again it should be now, before the high season really kicks in and the town overflows with excited holidaymakers.

The first leg of my journey brought me to the new Moynihan Station on Eight Avenue for the first time. Looking like a sort of ghost wing of Bellevue Hospital, with private seating to repel the homeless, the new station looked both functional and sterile, a place to escape from rather than to arrive. I barely looked up until my train arrived in Boston. 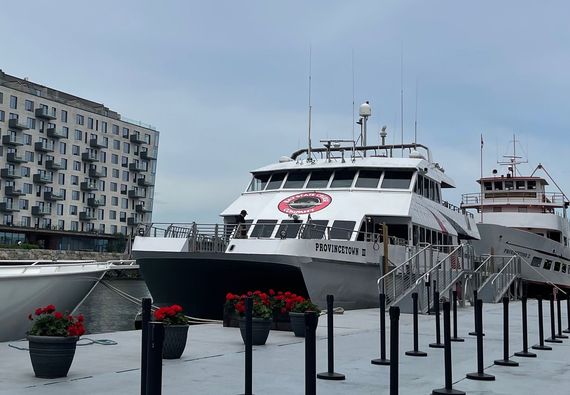 Getting to Provincetown is usually best done by fast ferry, which you can pick up in Boston via the Bay State Cruise Company, the oldest running fleet still serving the route. This expertly run company understands that your vacation really starts upon boarding, so they roll out a warm welcome befitting that fact.

Leaving Boston on the dot, there's a sense of quiet exuberance that accompanies the fast ferry voyage out of Boston harbor, as it quickly heads out toward the open sea and then that long spit of land on the tip of Cape Cod. This is where the cameras and iPhones first start to appear and an invisible signal is given that for a few days or a week or two ordinary life will end. I love this moment.

Arriving after the 90-minute voyage is another bit of theatre and fun. You can spot the tall Italianate tower of the Pilgrim Monument (completed in 1910) long before the ferry finally turns into the Provincetown harbor. A brilliant vantage point from which to get your bearings, the monument's gorgeous views are well worth the steep climb, as is a leisurely visit to its attached museum, which tells the story of the first colony and its impact on the lives of the native Americans. 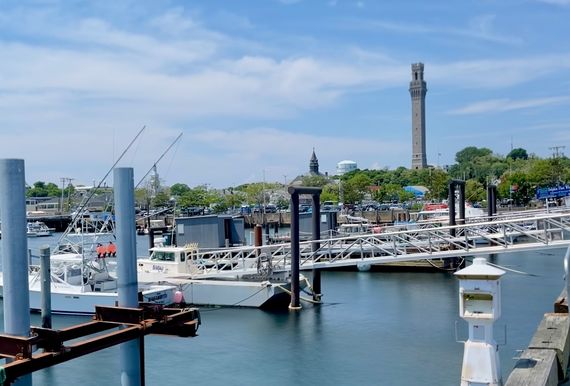 An enduring highlight of any Provincetown trip is the quality of the guest houses and hotels on offer. On this trip, I stayed at the immensely stylish and welcoming 8 Dyer Hotel, a superbly run, ideally situated guest house that welcomes all visitors, gay and straight.

Reserved exclusively for adults age 18 and over, 8 Dyer Hotel welcomes couples, singles, honeymooners, and friends' getaways in a completely non-smoking and pet-free property.

Although it's for adults only, the atmosphere is less YMCA in the 70s and more upscale five-star hotel featuring a swimming pool, jacuzzi, and sauna.

Breakfasts, which I soon discovered are the best in town, are served onsite at the weekends or weekdays at the nearby casual brunch restaurant Yolqueria (innkeepers Brandon and Steve are graduates of the Culinary Institute of America (Brandon) and attorney and federal government executive (Steve) who both fell under the town's spell and opened their thriving businesses here). 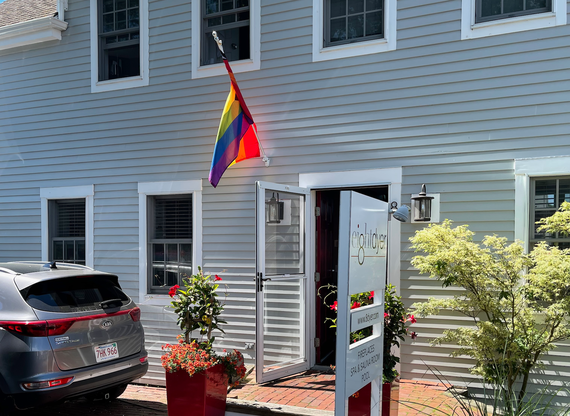 Brandon and Steve both love to travel, which is why they understand what separates a good hotel from a great one, and that attention to detail can be found in each room and bathroom, all of which include a mini-fridge, safe, bathrobes, silverware, wine glasses, TV's, fireplaces, king and queen-sized beds.

There was always Starbucks coffee, fine teas, and espressos available. It's the kind of attention to detail that anticipates your requests before you make them that makes an 8 Dyer Hotel stay so rewarding and fun (yes, they have bike racks).

It helps that the hotel is located close to many of the best food stops in town like Far Lands Provisions (run by Tom Boland and his partner Jim Farley) who serve their award-winning sandwiches or nearby Angel Foods groceries where you can buy gourmet take-home meals. 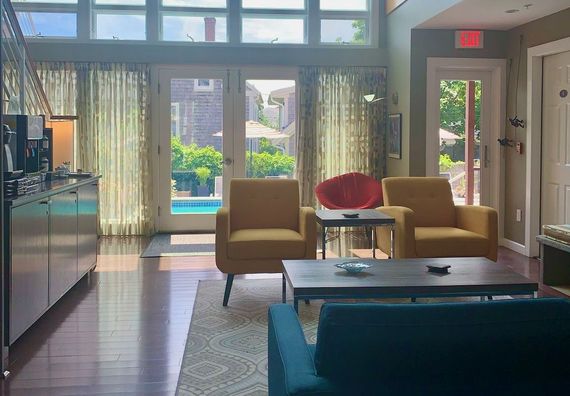 The stylish interior of 8 Dyer Street in Provincetown. (Cahir O'Doherty)

Repeat Ptown visitors also know that Scott's Cakes serve the best cupcakes you will ever eat and that Liz's Cafe Anybody Bar features some of the most consistently good food in town. For a night out you should book the Front Street Restaurant for hearty and delicious Italian fare that will turn an ordinary night into an event.

But what startled me most about my recent short visit to Ptown was that the majority of vacationers seem to have decided that the worst is now over, forgoing their masks and filling the bars, clubs, and restaurants again as though the pandemic were a bad dream, a thing to be quickly forgotten.

I kept mine on in public, because for me the story hasn't quite ended yet, but I was cheered by their determination and optimism.

Out on my bike cycling past the local landmarks, I quickly recalled what had enchanted me about the place when I first arrived there with my husband in my 20s. I love the cool caress of the sea air as cycle out to Herring Cove or Race Point Beach.

I also love the strange assist of gravity as I freewheel through its thronging summer crowds. I love the wilderness on the edge of town and the sunlight setting on the harbor. Even drawing up to Arnold's Bikes to hire a bicycle for the visit is a cheering piece of continuity that connects me to every prior decade of myself, pre and post-pandemic times.

I fell for Ptown hard in my second decade and I find my ardor for it has only grown. So I was right to come here, even at a time like this, or perhaps especially at a time like this. And I suggest you go yourself soon. It'll restore and recenter you.