An online discussion Road to the North Country: Interpreting Dylan will air on Facebook on Dec 15. 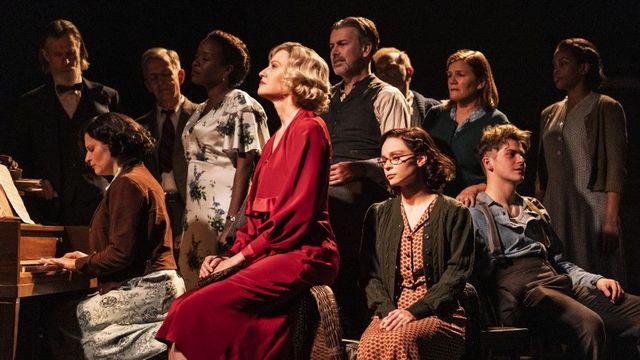 The cast of Girl From the North Country. Matthew Murphy

Playwright Conor McPherson's Broadway musical Girl From the North Country, which he wrote and directed, opened here nine days before the coronavirus pandemic forced all the theaters to close.  It was the shortest run the award-winning writer has ever enjoyed on one of New York's main stages. But as Cahir O'Doherty reports, this month the show's performers will be back to perform their roles online for free.

Sooner or later we all become stories, so the trick is to make sure that they're good ones. Few writers live with this awareness like the playwright Conor McPherson.

In March the 49-year-old Dublin-born writer brought his critically acclaimed musical Girl From the North Country (based on the music of Bob Dylan) to Broadway for what would have been a very long and very profitable run, but fate had other plans in store.

The coronavirus pandemic shut the theaters just nine days after the show opened to a stunning review in The New York Times, which called it “as close as mortals come to heaven on earth.”

It's the kind of reversal that really only happens only in history books, but it couldn't be helped. The cast, which had been working on the production since 2017, had to call it a day. The lights went out.

Or so it seemed. Because this week news broke that the original Broadway cast has reassembled to perform Road to the North Country: Interpreting Dylan, a virtual live stream event presented by the Bob Dylan Center which will feature cast members Todd Almond, Jeannette Bayardelle, Colton Ryan, Kimber Elayne Sprawl and Mare Winningham from the acclaimed musical.

It's the closest you will come to the show until there's a working vaccine and an all clear for the cast to return to their big Broadway house (and that day assuredly is coming, so try to keep it in mind).

Girl From the North Country has been a passion project for McPherson for years. A lifelong fan of Dylan and also America, which made his career, he's the ideal observer and agent for a play about Dylan's lifelong theme because it's his own, the fate of love.

The play, which this reviewer caught before the Broadway opening, is set in Depression-era Minnesota, which is also Dylan's home state, offering the show an opportunity to observe the American Dream as it's stripped bare, with all the possibilities and challenges that suggests.

It's a grey world, and the show mostly unfolds in a rooming house that sees a series of transients passing through on their way to fortune or ruin, pausing first to open their hearts in song and tell us what their journey and country have made of them and what they have made of themselves.

Watching the show you realize just how close Dylan's preoccupations have also been McPherson's. Rootless people, rootlessness, loves lost and lifelong hauntings, it's all there in the material and all there in McPherson's characters and direction.

It's a love letter to America, this show. To its potential and broken dreams, to the spirit that won't quit, that gets up after every setback, that defies the hard rules that others have laid down. The music is played live on good honest instruments -- fiddles, guitars, piano.

McPherson wants nothing to come between the audience and the truth, and his instinct seems to be to drill down to the bedrock of things, the better to understand them.

Duluth, where the musical is set and where Dylan was actually born, is a town on the edge of Lake Superior and the Canadian border, a liminal place that people pass through on the way to their real lives and so a place where secrets can be revealed to strangers that would never be spoken of to the people you actually know. And so it proves in this big, atmospheric show that is among the most important of the Irish playwright’s career.

Curiously, the show itself vanished overnight as completely as some of the characters it profiles. For months after I saw the posters for Girl From the North Country fading on billboards in empty subway stations. It was an eerie example of life imitating art, so the news that there will soon be a revival of the songs from the show, by the actors who originally performed them on Broadway, seems like the ultimate Hail Mary pass, a fact to be celebrated.

When Almond sings “Duquesne Whistle” he creates not just an atmosphere but, it feels, a whole city, and Winningham's version of “Like a Rolling Stone” sounds like it has been hand delivered from Mount Olympus, rather than a Midwest flophouse. It's one of the most electrifying performances I've ever seen on a stage anywhere and worth the ticket price alone (the concert is free).

If you visit Broadway now it has the ailing look and feel of McPherson's Duluth flophouse, full of transients, addicts, and the hard living, an ironic development the playwright himself can't have missed. The theater marquee advertising his show is still up, though the house is dark, and only the ghost light on the stage announces that it had staged a critically lauded play.

So the chance to catch this show at the tail end of 2020, when every other Broadway show has closed and most may never return seems near miraculous, like something that might happen at the end of one of McPherson's own dramas.

The exclusive online panel discussion with cast members will be moderated by theater and music journalist Elysa Gardner on December 15. The panel will discuss interpreting Dylan’s words and music, as well as sharing some videos of the cast performing songs featured in the show, including content created during the citywide shutdown and the Black Lives Matter movement.

Until the pandemic is under control and a vaccine gives us our lives back we will have to live with these events online that bring live events to us safely. If you tune in it will reward your efforts because Girl From the North Country was one of the brightest lights on Broadway before the world changed.

It's interesting that the two biggest solo stars of the 1960s and 1970s, Dylan and David Bowie, both had their work interpreted by two Irish playwrights in the last five years. Enda Walsh wrote Lazarus, a musical with music by Bowie at the New York Theatre Workshop which opened just days before the legendary singer’s passing in 2016.

Walsh also wrote the book for Sing Street, which also saw its Broadway run curtailed by the pandemic in early March (the show is now aiming for an opening between winter 2021 and 2022 at a Shubert theater to be announced).

Road to the North Country: Interpreting Dylan will be presented on Tuesday, December 15 at 7:30 p.m. on Facebook. The event is free to attend.