Ann Lovett, aged 15, died after giving birth in a Church grotto to her illegitimate child on January 31, 1984. The silence that followed and the shame in Ireland still remain. 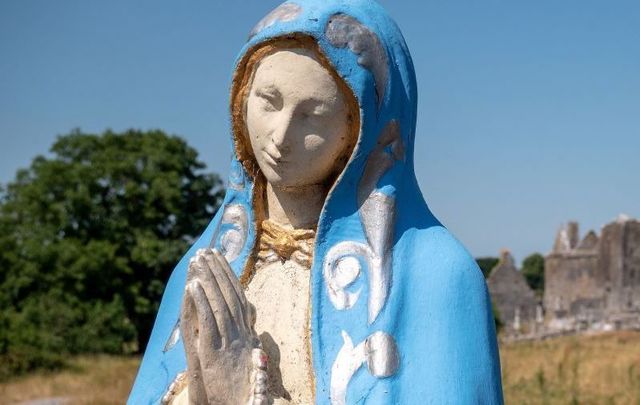 Ann Lovett and her child were buried near the spot where she gave birth. Getty Images

Ann Lovett, aged 15, died after giving birth beneath a statue of the Virgin Mary on January 31, 1984. Ireland's silence in the aftermath of the tragedy is still felt.

I sometimes think that Ann Lovett’s name has been lost to time now, but I’ve thought about her a lot over the decades. Her death changed the way I thought about Ireland, about what kind of people we were.

I was almost the same age as her when the 15-year-old schoolgirl from Granard, Co. Longford, stepped out of her classroom one afternoon and went for a walk.

It was January 31, 1984, a cold wet winter’s day across Ireland. It was already getting dark the way it used to in the countryside in the 1980s with fewer streetlights. It certainly wasn’t the weather for an afternoon stroll.

Her disappearance wasn’t noticed, which was strange because Ann wasn’t the type to skip school. She was a lively, intelligent girl with artistic talent, her headmistress said.

Later in the afternoon, some passing schoolboys heard her crying in the grotto near the Granardkill graveyard. Alarmed, they raced to the scene.

They found that 15-year-old Ann had just given birth to a baby boy beneath the statue of Our Lady.  Now she lay there with the child already dead beside her, wrapped up in her overcoat.

Being Irish teenagers of the era they alerted the first authority figure they could find, which in this case was a passing farmer. He ran to the local priest’s house right away to inform him of the tragic find.

“It’s a doctor you need,” the priest told the farmer evenly.

The farmer took note of his tone. But Ann was in shock and the young schoolboys had already carried her, hemorrhaging heavily, to the door of the priest’s house.

When the doctor arrived he drove her home to her parent’s house to await an ambulance. She was dead before it arrived.

What followed will be familiar to anyone who knows about rural Ireland in the 1980s. A wall of silence descended that would not lift.

Read more: Boyfriend of Irish schoolgirl who died in childbirth in church grotto speaks out

Locals would not speak to the press. Some criticized their silence as complicity; others felt it was their only possible response to the tragic circumstances of the case and the sudden invasion of the town by the world’s press.

The father of the child didn’t come forward, then or ever.  Some reports speculated that Ann had had a very difficult life at home.

Some made even darker allegations. There were and still are more questions than answers surrounding the case.

But what I remember most is the shame. I remember how it fanned out like an umbrella until it covered the town.

When asked would she cooperate with a public inquiry into Ann’s death Sister Immaculata, the Principal at Ann’s school, said tersely that she thought it would be “very insensitive” but she would comply.

There’s a silence on the edge of Irish life that I associate with graveyards. In the 1980s when you had done something, or become someone, or had something happen to you that your community considered unspeakable, you could be escorted to the edge of town where a huge silence would fall around you. Once it had fallen it would never lift.

Your guilt or innocence was beside the point. It was up to you to grasp the implications.

Read More: The state apologies to Joanne Hayes and others have come too late

This all feels like yesterday, even though 1984 was more than 35 years ago.  It was a time when any Irish girl (or boy) could find themselves so thoroughly ashamed of some perfectly ordinary event they were unable to ask for the help they needed from her community and nation. They could find themselves cast into the outer darkness, overnight.

Thousands vanished into it. I saw it happen. I almost had it happen to me.

Just months before Ann’s death I had watched adults tear the country apart over the abortion referendum. If the ban were not written into the Constitution it would lead to every manner of social ill against young women and girls, we were told.

So the ban had passed and yet here we all were, with teenagers having babies in graveyards alone and uncomforted and no one anywhere to help them. We may have protected a child’s rights, but we neglected to think of the mother’s.

Ann didn’t live to see her 16th birthday. She missed everything that happened in all the years after. The Celtic Tiger, the World Cup, the peace process, all the long days ahead of her that I was fortunate to see.

So I remember the shame and silence of the country she passed away in. I carry it with me like a tattoo, as does every other Irish person who lived through those times.

I can still remember how they found her crying in a graveyard with her dead child beside her. Within three days they had buried both of them near the very spot.