For Sinn Féin, the future is now. A border poll within five years should be the party’s objective. 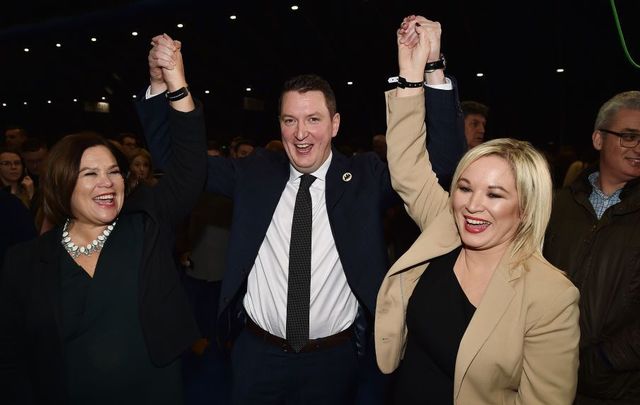 The upshot of last week’s U.K. election is dramatically clear.  There is now no reason why the Democratic Unionist Party (DUP) and Sinn Féin cannot go into government together and re-open the dormant Northern Ireland Assembly.

The fact is that both parties need the Assembly much more than they did before the election. The DUP’s stance in favor of Brexit resulted in one of the party’s worst election failures ever, highlighted by the loss of the seat held by Nigel Dodds in North Belfast who led the party’s parliamentary delegation to Westminster.

The DUP is also aware that for the first time in history, more nationalist MPs were elected than unionist ones. The unionist leadership, as a result, has been left in disarray.

The DUP decision to hang on and refuse to pass several versions of Brexit, because they felt they could get a better deal, has proven catastrophic.  Northern Ireland citizens voted against Brexit, a fact that seemed to be lost on the DUP.  But the party surely needs no reminder now.

For the DUP, there is simply nowhere else to go but back into the Assembly in order to keep any semblance of relevance in British and Irish politics.

Boris Johnson’s government in Westminster will run for five years, and with a handsome majority of 80 in the House of Commons, the Conservative Party will not be calling on the DUP anytime soon to stay in power.

As for Sinn Féin, they did not have the greatest election despite John Finucane taking Dodds’ seat.  The electoral pact with the moderate nationalist SDLP worked to perfection, but Sinn Féin now faces opposition from the SDLP which had seemed to be irrelevant until very recently.

Because Sinn Féin is an abstentionist party, they have no political forum in British politics either, other than going back into the Assembly.

Issues such as the Irish language no longer have the emotional impact they may have had some years ago in the North.  Sinn Féin also found out while campaigning that nationalists would rather be inside Stormont shaping the future as opposed to outside.

Ironically, the huge victory for Sinn Féin in the election was the extent of the Tory triumph and the fact that Johnson had already snubbed the unionists in his negotiations to get Brexit passed.

This is a moment of enormous political significance for Sinn Féin.  Brexit has brought the issue of an Irish border poll, and Irish unification, front and center again.  Sinn Féin must clearly realize that they need to be inside the institution, pushing that point of view, rather than outside protesting.

Brexit has been good for Irish and Scottish nationalism, a reminder that for every action there is an equal and opposite reaction.  English nationalism has its Brexit, but Scotland and Northern Ireland now have a real chance at independence and reunification.

For both the DUP and Sinn Féin, the stakes could not be higher.  Taking the hardline and refusing to acknowledge the North’s anti-Brexit vote has deeply fractured the DUP ad left the party impotent in British politics.

The shape of Northern Ireland politics may have been changed forever by Brexit.  Recent unexpected victories in the European and U.K elections by the almost forgotten Alliance Party have shown that there is the beginning of a middle ground in Northern Ireland and that the electorate responds well to moderate politics.  This reality clearly shows the necessity for parties to work together.

For Sinn Féin, the future is now. A border poll within five years should be the party’s objective.

But Sinn Féin must be understanding of unionist fears and concerns and acknowledge the message the Alliance victories have sent to the North’s political parties.

For the DUP, there is finally the realization that they have more to fear from English nationalism than Irish. The party needs to find a way to wok across the divide and lose its arrogant assumption that only they speak for Northern Ireland citizens.  Clearly, that is no longer the case.