Why is the Land of the Free attacking my fundamental freedom to have a choice?

The land of freedom and opportunity is denying just over half of its population, citizens and otherwise, the chance to decide their own futures, taking life-changing decisions from their hands and making them for them. 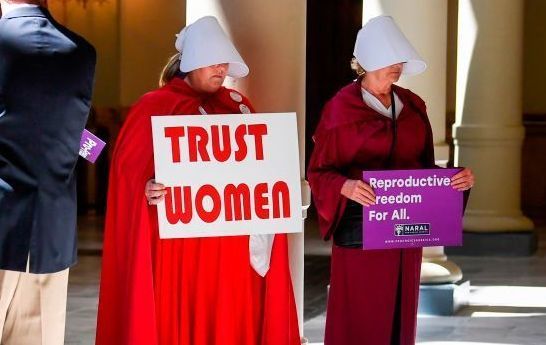 Activist Tamara Stevens (L) with the Handmaids Coalition of Georgia holds a sign as Democratic presidential candidate Sen. Kirsten Gillibrand (D-NY) addresses an event at the Georgia State Capitol to speak out against the recently passed "heartbeat" bill on May 16, 2019, in Atlanta, Georgia. JOHN AMIS/AFP/Getty Images

The Alabama abortion ban is not the America our ancestors worked for with the Land of Liberty stealing the American Dream even from its own citizens.

You thought women in the US and around the world were angry during the Brett Kavanaugh hearing? You thought they were enraged during the #MeToo movement?

Those moments feel just like warm-ups now for the largest battle women in America are having to face—the battle to stop the country that once offered everyone the promise of a better future from taking the decisions on our futures out of our own hands.

The war has now begun to stop male-led governments from taking control over the bodily autonomy of 50.8% of the U.S. population and stopping them from telling women that their safety and health are always going to come second.

For the 11-year-old girl in Ohio, who never had the chance to make a decision on whether or not she would carry her rapist’s child, is the America we once looked up to, the America earlier generations of Irish immigrants journeyed to for a better life, now giving her the best future possible by introducing laws such as Ohio’s Human Rights Protection Act.

Signed on April 11 by Republican Gov. Mike DeWine, this “heartbeat” law gives no exceptions for rape and incest and bans abortion as soon as doctors can detect fetal cardiac activity.

This activity starts at about six weeks of gestation, even before some women know they’re pregnant and I’m guessing before pre-teen girls will realize what’s happening to their bodies as well.

‘The state of Alabama ought to be ashamed of herself.’ — These Alabama state senators spoke up against the abortion ban pic.twitter.com/5DWavptbux

While this Ohio law, thankfully, will not come into effect until mid-July, allowing this young child to end her pregnancy in this case if she wishes to do so, the emergence of more and more shocking stories of its kind, as Alabama and Missouri join Georgia and Ohio in attempts to implement stricter abortion laws, has unleashed a fury I’ve never known from those not willing to let the US slip back into restricting the rights of women as other countries move forward.

The rage and uproar I’ve witnessed in the past few days shows just how much US citizens and immigrants to the US are determined to see this country retain its title as the Land of the Free, the land where you determine your own future and will not let patriarchal systems keep women trapped in a pregnancy they cannot bring to completion, for whatever reason that may be.

Protestors want abortion right to be available in both the Republic and Northern Ireland. Image: RollingNews.ie.

While always thinking of myself as pro-choice, it wasn’t until the campaign for Ireland’s own referendum had begun in 2018 that I found myself wanting, even needing, to express my support for repealing the eighth amendment to the Irish constitution that all but banned abortion in Ireland.

What brought out my inner activist so late to the game?

Knowing for a long time that so many Irish women had suffered because of our harsh abortion law and knowing the annual figures of women leaving the country to have a termination elsewhere, I was still stunned by the stories that emerged day after day of heartbreak, suffering, unwarranted shame and trauma, as more and more Irish women bravely told their stories.

The weight of those stories was crippling.

The pain caused to women from all walks of life by the eighth amendment caught me off guard every single day with the cruel ways in which these tremendously courageous souls had their own choice taken away from them.

Celebrations in Dublin Castle as the eighth amendment was repealed by popular vote. Image: RollingNews.ie.

And now the tables have turned and the American women who stood behind us as Ireland repealed the eighth, they now need our help.

These women pledged their support and their voices to ensure that the lives of Irish women were no longer put at risk and raised awareness so we were no longer forced to make lonely journeys across the sea to procure a medical procedure to save our lives.

Stand with them and help them uphold America as the country we know it can be.