World’s oldest family, The Donnellys, share their secrets to a long life

Apples, football, and plenty hard work are the order of the day for the Northern Ireland family. 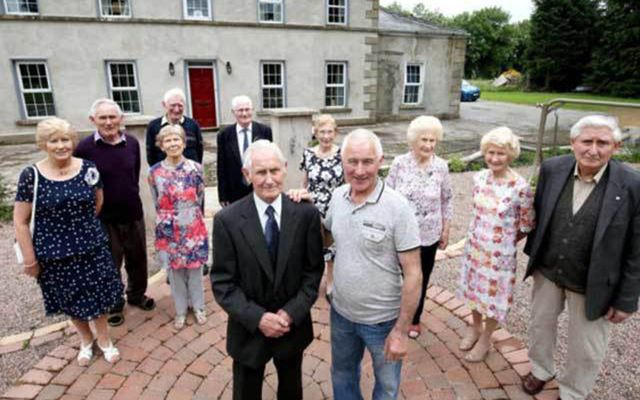 The Donnelly siblings, the oldest family in the world. BBC

The Irish family officially declared the oldest in the world has finally revealed the secrets to their extended lifespan: apples, Gaelic Football and plenty of hard work.

The 13 siblings in the Donnelly family of Co. Armagh – comprising eight brothers and five sisters – are all aged between 71 and 93 and their combined age is 1,072 years. They were officially named by the Guinness Book of World Records as the world’s oldest family this year.

In a new BBC documentary, “World’s Oldest Family,” which aired in the UK on Monday night, the Donnellys talked about their daily routines and how they have kept themselves fit and healthy in their later decades.

Much of it boils down to their childhood, they claim, and the nutritious food and good exercise they received on their father’s apple farm in Collegelands, Co. Armagh.

“They talk about these Mediterranean diets and this Japanese sushi, all this and that throughout the world, but we think we’ve got just as good in our back fields,” said Leo, 71, the youngest surviving sibling.

“Apples have been running through our veins since before we were born. My daddy got into apples in the 1930s.”

“When you’re young, if you get good food it’s built into your bones and that’s what will give you longevity,” added his brother Terry.

There was also plenty of sports to work up an appetite with all of the brothers in the family playing GAA when they were younger. Leo states: “I’m certainly glad we had that healthy lifestyle. It’s absolutely amazing that the simple things of life can have you stay on this planet for longer than any family.”

While there’s plenty of good fruit and vegetables in their diets, not one of the Donnellys could be found propping up the bar, another family trait they believe has led to their long lives.

“There is not a single drinker in this family. It would certainly help,” continued Leo, who still lives in his family’s country farmhouse.

An older photo of the Donnelly family. Image: Tru North.

It was Leo’s twin brother Austin who first came up with the idea of investigating whether or not he and his siblings were, in fact, one of the oldest families in the world. Unfortunately, Austin, the driving force behind the project, died on Christmas Day 2015 before the Donnellys officially claimed their title.

The Donnelly family’s father Peter was an only child, somewhat ironic given he had 16 children in total with his wife Ellen, who was a member of a 14-child household. Their youngest son Michael was tragically lost in a car crash in 1975 when he was 25. Another brother, Oliver, passed away aged 64 after a battle with cancer.

“Thankfully no TVs and no electric,” Leo said of the fact that his mother and father had a baby each year after their marriage in 1923.

Austin's death has reduced the family to 13 children, but given their large-family tradition, the family has grown to almost 200 members when grandchildren and great-grandchildren are included.

Did the Donnellys set the world record? @Angelascanlon finds out & so can you via @BBCiPlayer https://t.co/Rh7Amu7Iy9
World's Oldest Family pic.twitter.com/tLrUm8EtDP

While the Donnellys believe that their childhood habits were a strong factor in their good health today, they also like to keep themselves active in retirement.

“I find among my friends that have retired ... they just seem to fade away,” said Seamus, who has 11 children of his own.

“Where if you do something to keep your brain going and your muscles going and something to give you an appetite every day, it just keeps you going,” he said.

In particular, the story of Margaret and the Belgian soldier who fell in love with her while he was stationed in the North during World War II was an intriguing tale.

An Armagh family with a combined age of 1064 hope to set the world record!
World's Oldest Family tonight 7.30 pm @bbcone with @angelascanlon pic.twitter.com/NqWQS2hz0v

In order to prove their date of birth, all of the Donnelly siblings had to produce their birth certificates. The search resulted in long-forgotten correspondence and trinkets being uncovered and these were strewn throughout the family farmhouse. The found unanswered letters from the soldier named Jean who had asked Margaret to marry him on only their second meeting.

Margaret was sent overseas a few days after these letters were received. Margaret had never seen the love letters and pleas from Jean as they were kept from her by her mother.

The brothers and sister greatly enjoyed getting together for the celebrations last year without wives, husbands, and children in tow, but they fear it may be the last time the remaining 13 siblings are ever in the same place together.