The incredible 13 siblings in the Donnelly family are a combined age of 1,073 years old, making them the world’s oldest family. 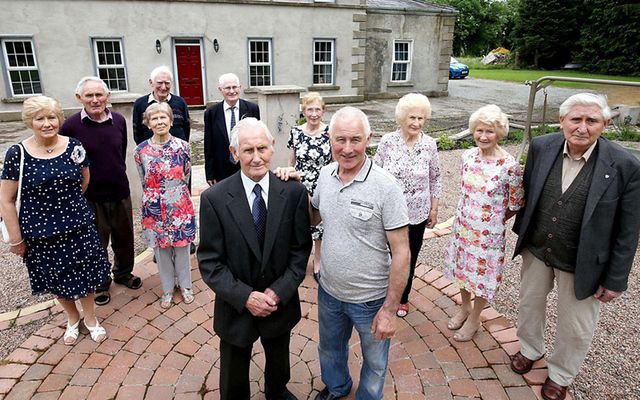 The Donnelly family with Paul Muldoon, the narrator of a BBC documentary made about the world's oldest family. BBC/True North

A group of 13 Co. Armagh siblings are in the midst of celebrating after officially becoming the oldest family of brothers and sisters in the world. The incredible Donnelly family, with a massive combined age of 1,073 years, was awarded the title by the Guinness Book of World Records in March but just met up this week in their childhood home to mark their momentous entry into history.

The 13 brother and sisters from Collegelands on the Armagh/Tyrone border gathered for an emotional occasion in memory of their younger brother Austin, who originally came up with the idea of following up on the record before he sadly died in 2015.

"At my sister Maureen's 90th birthday, my twin brother Austin said we must be the oldest family in the world,” the current youngest sibling Leo told the Irish Independent.

“It was a fly-away remark but it grew legs and we began making inquiries into registering for the Guinness World Record.

"We lost Austin on Christmas Day in 2015  and after that, there was even more of a determination to get ourselves verified and into that book, in his memory.

"After Austin died, it took a number of years off what we needed to make that record, but after 13 months we made it up again,” he continued.

"It was a great day on Sunday, we came together from all over, Mairead came from Coventry and then some of us are in Dublin, Belfast, and then from all over Northern Ireland.

"It was an emotional day as well because Austin wasn't there to celebrate with us. I could hardly make my little speech there was a lump in my throat.”

The Donnellys' story is to be the subject of a BBC documentary to be aired this coming June. After struggling to assemble the birth certificates, marriage certificates and three referees each needed for Guinness to accept their claim, the extraordinary family will feature on “The World’s Oldest Family” to take a look back at this remarkable story.

"We had to get everyone's birth certs together and of course some people didn't know where theirs was. We had to get some of them sent out again, and then the marriage certs for the girls who changed their names. We had to have three referees back us up, of course, to say we were who we said, including the local priest!” sad Leo.

Although himself an only child, the Donnelly family’s father Peter had 16 children in total with his wife Ellen, who was a member of a 14-child household. Their youngest son Michael was tragically lost in a car crash aged 25 in 1975 while a further brother Oliver passed away aged 64 after a battle with cancer.

With the unfortunate death of Austin in 2015, the family has been reduced to 13 children but following on with the large family tradition, between them the family has grown and grown to almost 200 members with grandchildren and great-grandchildren included.

While their father Peter died at what they call a young age of 79, after building a successful apple company, their mother Ellen lived right into her 90s. Peter Donnelly was one of the first people in Northern Ireland to own a tractor, the Irish Independent reports, and was a great entrepreneur who was also one of the first secure a license to export apples and potatoes to the UK.

While the brothers and sisters greatly enjoyed getting together for the celebrations without other wives, husbands and children in tow, they fear it may be the last time the remaining 13 siblings are ever in the same place together.

"There were no wives or husbands involved on Sunday, just the brothers, and sisters. We had a beautiful cake and the Guinness adjudicator flew over to verify that everything was in order.

“We're going to get in the book next year. When we started this thing there was a determination to bring it all the way and it's great now to have that title. It's more important to us because it is in memory of Austin."