As the Irish Competition Authority confirms it is "screening" CLRG and its management of the 2020 World Irish Dancing Championships, hotel bookings for the general public have been "temporarily delayed." 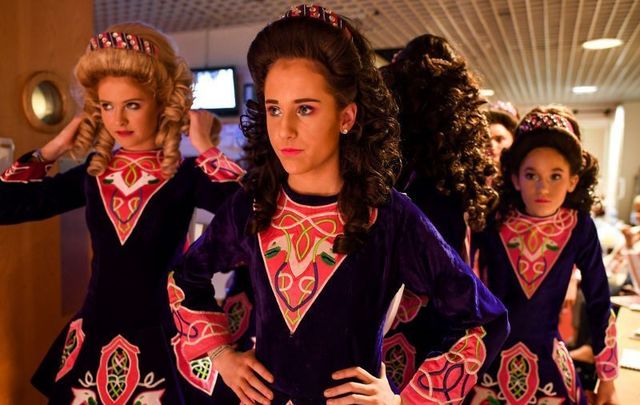 As the Irish Competition Authority confirms it is "screening" CLRG and its management of the 2020 World Irish Dancing Championships, general hotel bookings for the event are "temporarily delayed."

Last week, IrishCentral was the first to report on the complaint lodged by a group of Irish dance teachers (TCRGs) who were outraged to learn that the hotel rates within the hotel block designated by their governing organization An Coimisiun le Rinci Gaelacha (CLRG) for the 2020 World Irish Dancing Championships in Dublin showed nightly rates that were, in fact, higher than those advertised outside of the block during the same time period.

TCRGs were equally concerned that attendees who do not opt to stay in the designated hotel block will be subject to a daily 'facility fee'' of €50 per person when entering the event at the Dublin Convention Center, which comes in addition to the daily 'door fee' all attendees are subject to.

However, attendees who can prove residency in Ireland or Northern Ireland will not be subject to the additional 'facility fee,' no matter where they chose to stay in Dublin during the event. (The 2019 World Irish Dancing Championships in Greensboro, North Carolina had a similar policy - residents of NC were not subject to the 'facility fee.')

CLRG provided this breakdown of fees in its syllabus for the event which is set to be hosted from April 5 - April 12, 2020 at the Convention Center in Dublin: 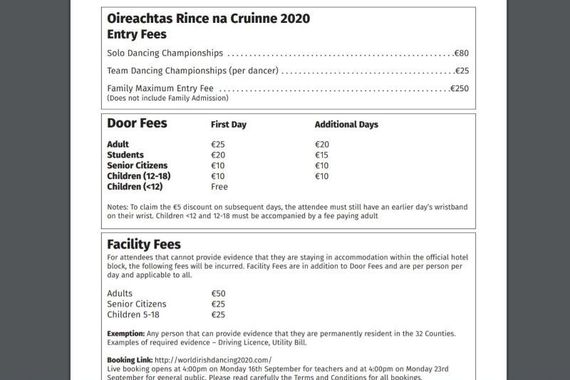 A breakdown of the CLRG entry fees for the 2020 World Irish Dancing Championships (CLRG.ie)

One TCRG told IrishCentral: "CLRG are going to get a kickback of €15 for every room booked in the block. The payment of the door fee and facility fee must be paid in cash this year." This teacher added that cash often “disappears” on “lavish rounds of champagne" and "other treats" throughout the event.

The conundrum is forcing Irish dancers, teachers, and their families who plan on traveling to Dublin from around the globe to choose between staying in a price-inflated hotel block, or face a higher daily fee at the competition’s doors.

In their complaint to The Irish Competition Authority, also known as The Competition and Consumer Protection Commission (CCPC),  the group of TCRGs said the mixture of inflated hotel rates and 'facility fees' were “clearly anti-competitive" and requested the matter be investigated.

Their official complaint included documentation of lower hotel rates that were offered on other booking sites the same day that the Worlds hotel booking system went live for teachers on September 16.

A copy of the CCPC's response was provided to IrishCentral which read: “The CCPC has commenced a screening process in relation to the CLRG, during which we will assess complaints we have received to establish if competition law applies to the issues raised and whether further action is required.”

As CLRG and its management of the event are being "screened" by the CCPC, hotel bookings for the event have been "temporarily delayed" with little explanation.

While TCRGs received access to the online hotel booking system from September 16, the general public was set to receive access on September 23. However, all bookings through the CLRG site are now "delayed."

On September 23, CLRG posted a message on its website that read: “An Coimisiun le Rinci Gaelacha regrets that the link to the online accommodation reservation system for Oireachtas Rince na Cruinne 2020 is currently unavailable.”

“Sufficient notification will be given (via www.clrg.ie and social media platforms) re the day, date and time as to when this service will again become available, so that all patrons will have an equal opportunity to secure their preferred accommodation.”

“We apologise for this temporary delay.”

Are you affected by the issues surrounding the 2020 World Irish Dancing Championships? Let us know in the comments