Dr. Michael Ryan, the Irish Executive Director of the World Health Organization's Health Emergencies Programme, said this week that the US has not produced evidence of coronavirus having originated in a lab in Wuhan, China. 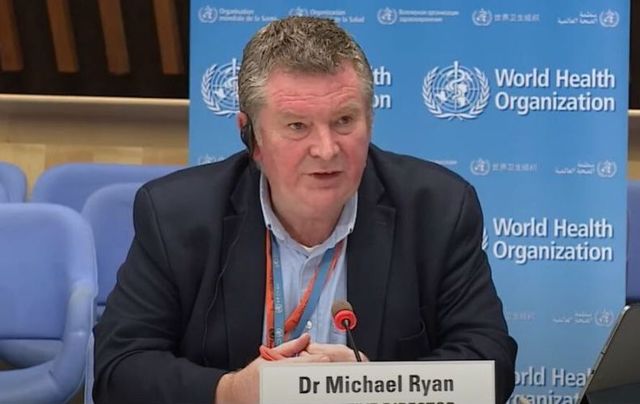 Dr. Michael Ryan said this week that the US has not produced evidence of coronavirus having originated in a lab in Wuhan, China. World Health Organization, YouTube

Dr. Michael Ryan says the WHO would be “very willing to receive any information” about the origins of coronavirus after Trump and Pompeo claim to have seen evidence that it originated in a lab in Wuhan, China.

Dr. Michael Ryan, the  Irish Executive Director of the World Health Organization's Health Emergencies Programme, said during a press briefing on May 4 that while the US has not produced any evidence that coronavirus originated in a laboratory in Wuhan, China, it would be willing to review evidence should it become available.

Dr. Ryan was responding to a question about US President Trump and US Secretary of State Mike Pompeo's recent claims that they have seen evidence that coronavirus originated in a Wuhan lab.

Dr. Ryan said: “We have not received any data or specific evidence from the United States government relating to the purported origin of the virus — so from our perspective, this remains speculative.

“So, if that data and evidence is available, then it will be for the United States government to decide whether and when it can be shared, but it is difficult for the WHO to operate in an information vacuum in that specific regard.

You can watch the WHO press briefing from May 4 here. Dr. Ryan’s comments come at 53:25:

Dr. Ryan’s comments come after both US President Donald Trump and US Secretary of State Mike Pompeo placed the origins of coronavirus at a lab in Wuhan, China.

During the April 30 press conference, President Trump was asked, "Have you seen anything at this point that gives you a high degree of confidence that the Wuhan Institute of Virology was the origin of this virus?"

Later, Trump was asked, “are you suggesting that maybe you have some evidence that this was not a naturally occurring virus?”

He replied: “We’re going to see what it is. You’re talking about the virus and where it came from?

When the reporter said yes, Trump continued: “No, we’re going to see where it is. We’re going to see where it comes from.  And you know — look, you know every theory, whether you had the theory from the lab, you had the theory from many different — the bats, and the type of bat, and the bat is 40 miles away, so it couldn’t have been here and it couldn’t have been there.  And we have a — there’s a lot of theories.  But, yeah, we have people looking at it very, very strongly.

“You have scientific people, intelligence people, and others.  And we’re going to put it all together. And I think we’re going to have a very good answer eventually. And China might — might even tell us. China may tell us.

Trump was then asked: “And what gives you a high degree of confidence that this originated from the Wuhan Institute of Virology?

The same day as Trump’s press briefing, the US Office of the Director of National Intelligence issued a statement that said: “The Intelligence Community also concurs with the wide scientific consensus that the COVID-19 virus was not manmade or genetically modified.

The statement added: “As we do in all crises, the Community’s experts respond by surging resources and producing critical intelligence on issues vital to U.S. national security. The IC will continue to rigorously examine emerging information and intelligence to determine whether the outbreak began through contact with infected animals or if it was the result of an accident at a laboratory in Wuhan.”

Mike Pompeo, the US Secretary of State, made similar remarks on May 3 during an appearance on “This Week” on ABC News. Pompeo said: “While the intelligence community continues to do its work, they should continue to do that and verify so that we are certain. I can tell you that there is a significant amount of evidence that this came from that laboratory in Wuhan.

When asked if he thinks coronavirus was manmade, Pompeo said: “Look, the best experts so far seem to think it was manmade. I have no reason to disbelieve that at this point.

“China behaved like authoritarian regimes do, attempted to conceal and hide and confuse. It employed the World Health Organization as a tool to do the same. These are the kind of things that have now presented this enormous crisis, an enormous loss of life and tremendous economic cost all across the globe.”

Dr. Anthony Fauci, however, said in an interview that was published in National Geographic on Monday: "The best evidence shows the virus behind the pandemic was not made in a lab in China.

“Everything about the stepwise evolution over time strongly indicates that [this virus] evolved in nature and then jumped species."