The Vatican could face financial collapse in the coming years as worldwide donations have plummeted in the wake of the widespread sex abuse scandal. 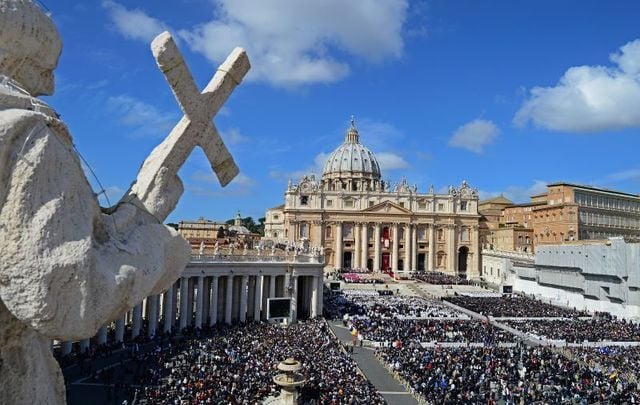 The Vatican could face financial collapse as soon as 2023, a new book claims. Getty Images

The Vatican could be facing a financial collapse as soon as 2023, a new book claims.

The Telegraph reports that “Universal Judgement,” a new book by Italian investigative journalist Gianluigi Nuzzi which scrutinized more than 3,000 confidential Vatican documents, says the Vatican is in dire financial shape.

In his new book, Nuzzi, who was previously acquitted by the Vatican after being accused of publishing leaked documents, cites a letter from a Vatican official that read: “The deficit is recurring and structural and has reached worrying levels. We risk a default if no urgent steps are taken.”

The Vatican deficit is “like a voracious and insatiable parasite, attacking wealth that was accumulated over the centuries from the pious offerings of the faithful.”

According to The Telegraph, the amount of money donated by ordinary Catholics to the Church has plummeted from €101 million in 2006 to €70 million in 2016 and may now be less than €60 million.

Only a fifth of those donations received go to the poor and needy, while the rest is “held in bank accounts or used to plug gaps in the finances of the Curia, the Vatican’s governing body.”

The Vatican has set up an emergency task force to address its financial crisis as its losses rose from €32 million in 2017 to nearly €44 million last year.

The financial situation coincides with the widespread sex abuse scandal, which has affected the Catholic institutions in the US, Ireland, Australia, Chile, and other locations.

Pope Francis admitted that the Church’s “credibility has been seriously undercut and diminished by these sins and crimes, but even more by the efforts made to deny or conceal them.”

Catholic News reports that Bishop Nunzio Galantino, president of APSA (the entity that runs the Vatican's property portfolio), dismissed the claims Nuzzi makes in his new book, saying that the accusations are hardly an accurate description of "an articulated and complex reality like the church."

Bishop Galantino said in an October 22 interview that allegations of mismanagement and that the Vatican is facing collapse are "not true."

"The current (financial) situation of the Holy See is no different than that of any family or even states in different continents," he said. "At a certain point, one must look at what is spent, what is brought in and try to rebalance the expenses."

He added that APSA's balance sheet "is not the result of stealing, cunning, and misguided management."

"The supervisory instruments put in place by Pope Benedict XVI and strengthened by Pope Francis are making it possible to put in order the management of this patrimony to balance expenditures and income and, where necessary, to correct practices with respect to the responsibilities of the administrative bodies of the Holy See," he said.

What do you make of the Vatican's alleged financial situation? Let us know in the comments