Vandals try to destroy one of Ireland's most popular tourist attractions

The damaged rope bridge was first put there by salmon fishermen in 1755. 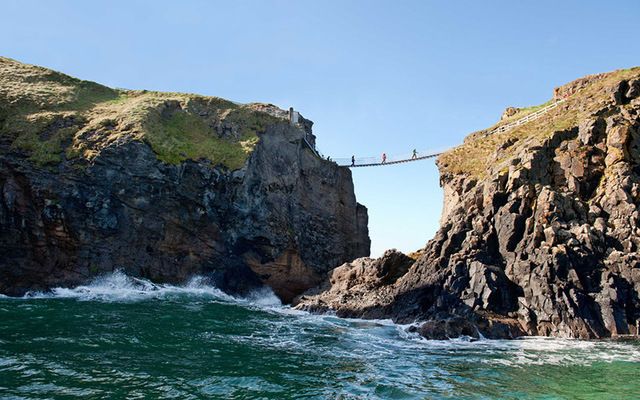 The iconic Carrick-a-Rede rope bridge located near the Giant’s Causeway in Co. Antrim has been forced to close.

Vandals tried to cut through the rope bridge, one of Northern Ireland’s most popular tourist attractions, in what seems to have been an attempt to collapse the bridge entirely, forcing staff to tweet that they expected it to be shut for the “foreseeable future.”

However, engineers have set to work and it’s expected the bridge will now reopen today.

The bridge dangles 100 feet above the crashing waves of the Irish Sea and connects the mainland to the picturesque island Carrick-a-Rede.

The vandalism was spotted during a routine safety check and reported to the Police Service of Northern Ireland.

Officials said the vandalism was “mindless” and “could have very serious consequences”.

Carrick-a-Rede Rope Bridge is closed today and for the foreseeable future due to an act of vandalism overnight. Further updates to follow.

Very disappointing. We're working with structural engineers now to assess damage and will update as soon as possible. https://t.co/TZBQudSonq

"We're thankful to get the engineers up onsite so promptly this afternoon and work through the process of getting it repaired," Frank Devlin from the National Trust told BBC Radio Ulster.

"Tourism is such an important part of the economy here in Northern Ireland. The potential for the bridge to have been out of action for much longer was very high.

“At some stage last night, someone cut one of the ropes on the bridge. It's not cut the whole way through, but it's cut significantly that we have had to close the bridge today and we can't allow anyone to cross."

The bridge was first erected by salmon fishermen in 1755 and has become such a popular tourist attraction that last year ticketing was introduced to help manage visitor numbers.