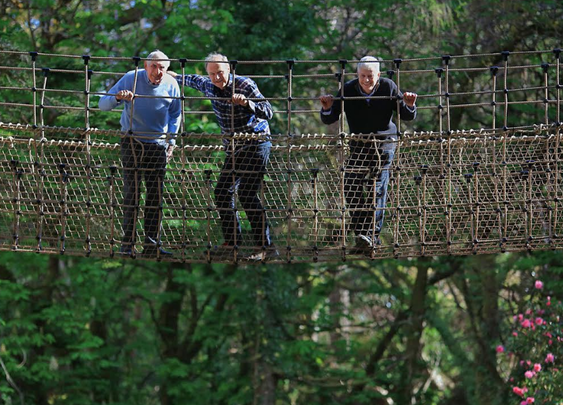 Ireland’s longest rope bridge is now opened to the public along the breath-taking Skellig coast on the Wild Atlantic Way in County Kerry.

‘The Skywalk’ is the south west coast's latest tourist attraction that is expected to enhance the area as part of the Skellig Coast Tourism Network. Visitors can walk on the wild side and test their nerve on this new rope bridge; a 112ft (34m) long, 36ft (11m) high structure which extends across the River Delligeenagh near the Ring of Kerry route.

Construction of the bridge took five months to complete and is now part of the Kells Bay House and Gardens. This 44 acre property is home to an abundance of native and exotic plants that provide an exceptional subtropical experience which rivals the beauty of many of the world's rainforests.

Owner of the Kells Bay House and Gardens, Billy Alexander, who purchased the grounds during the 2000’s has said that ‘The Skywalk’ has already been a hit with the locals and hopes it can increase the 10,000 plus visitors the gardens already receive.

Billy said, "I'm delighted with the initial reaction to the Skywalk. It has been a challenging journey but the feedback from local visitors and early tourists has given me great confidence that this will bring Kells Bay Gardens to a new audience.

“The Gardens are the key driver in encouraging visitors to turn off the N70 Ring of Kerry road and discover the beautiful beach, the pier the mountains and seclusion that Kells has to offer.  Over the last decade we have overcome many fiscal and floral challenges at Kells Bay and with the advent of the Skywalk, we stand on the cusp of securing the future of this fantastic place,”

'The Skywalk' rope bridge at Kells Bay House and Gardens

‘The Skywalk’ was officially opened by environmentalist and businessman Sir Tim Smit who is famous for his work with both ‘The Lost Gardens of Heligan’ and the ‘Eden Project’ in the UK. He said, “There are thousands of gardens in Ireland and The British Isles and many of them employ words like ‘magical, romantic and mysterious’ to describe themselves. In truth they are mostly hopeful. “To be magical you need to have a wild untamed streak, an invasion of marvellous plants and a presiding genius who believes that this place should ground the lightning of love of nature. Billy Alexander is exactly the sort of inspired magician that a truly magical garden needs. He is the Prince that kissed the Sleeping Beauty that became Kells Bay”.

County Kerry’s west coast has received worldwide notoriety in recent years following the latest Star Wars films which featured the picturesque Skellig Islands located in the Iveragh Peninsula. The Skellig Coast Tourism Network has been set up by Failte Ireland in the hope of capitalising on this new found popularity by broadening the appeal of the wider region surrounding this attraction.

Carrick-a-Rede Rope Bridge connects the mainland at the tip of County Antrim to the tiny island of Carrickarede and was originally constructed for the local salmon fishermen in 1755. Now it is one of Northern Ireland’s top tourist attractions, welcoming thousands of visitors each year.

‘The Skywalk’ at Kells Bay House and Gardens officially opened to the public on April 8th.

Would you take to the sky on this rope bridge? Let us know what you think in the comments below.