Van Morrison is being sued by Northern Ireland's Health Minister for allegedly harming his reputation by implying he was unfit in the handling of the COVID-19 pandemic. 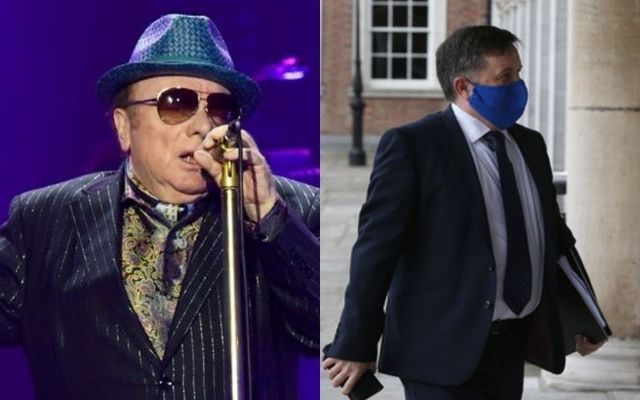 Irish rock icon Van Morrison is being sued by Northern Ireland's Health Minister for calling him "dangerous" over his handling of the COVID-19 pandemic.

Northern Ireland's Health Minister Robin Swann claims the musician's public comments harmed his reputation by implying he was unfit for his position and mishandled guidance during the pandemic, according to Northern Ireland's Sunday Life newspaper.

“Proceedings have been issued and are ongoing against Van Morrison. We are aiming for a trial in February,” Swann's lawyer, Paul Tweed, said.

The lawsuit revolves around three instances in which Morrison allegedly defamed Swann.

The first was when Morrison and DUP MP Ian Paisley, Jr. faced widespread criticism in June of this year after they launched a scathing attack against Swann.

Paisley, Jr joined the famous singer on stage at the Europa Hotel in Belfast after a series of Van Morrison concerts were canceled at the last minute due to Northern Ireland's public health restrictions.

A total of four Van Morrison gigs due to take place at the Europa Hotel were canceled at the last moment on June 10 because live music is still not permitted under Northern Ireland's coronavirus restrictions.

Morrison, who has been a vocal opponent of Northern Ireland's restrictions, made a brief speech at the canceled gig in June before inviting Paisley to join him in a repeated chant of "Robin Swann is very dangerous".

"Robin Swann has got all the power, he is keeping us in this over 15 months," Morrison shouted at the crowd before inviting Paisley on stage.

The second incident was when Morrison was asked about his comments and he told the Sunday Life, "No, no I don’t regret it. Of course, he’s dangerous."

“He’s a fraud, I believe he’s a fraud. Why should I regret it?" he added. “He called me dangerous and I’m calling him dangerous.”

Finally, the third was when shortly after his newspaper interview, Morrison posted a YouTube video titled "For Clarity" to explain why he thought Swann was "dangerous."

Morrison incorrectly referred to the health minister as “Robert Swann” in the video and said Swann "decided he wanted to get mixed up in my business."

In the video, Morrison also said he contacted Swann roughly a year ago requesting "scientific evidence" to corroborate why live music was banned during the pandemic.

This video will feature in the lawsuit in which Van Morrison allegedly defamed Robin Swann:

Morrison has also penned a trio of songs last year protesting the COVID lockdowns and accusing the government of "taking our freedom."

Swann responded to those songs in an opinion piece for Rolling Stone last September. “His words will give great comfort to the conspiracy theorists — the tin foil hat brigade who crusade against masks and vaccines,” the health minister wrote.