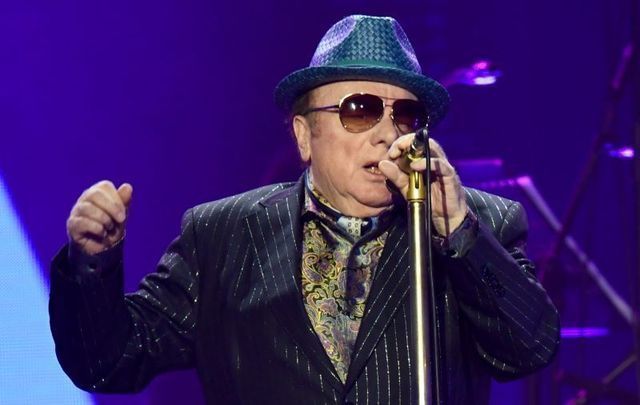 Van Morrison has been a vocal critic of Northern Ireland's health restrictions. Getty

Paisley, Jr joined the famous singer on stage at the Europa Hotel in Belfast after a series of Van Morrison concerts were canceled at the last minute due to Northern Ireland's public health restrictions.

A total of four Van Morrison gigs due to take place at the Europa Hotel were canceled at the last moment on June 10 because live music is still not permitted under Northern Ireland's coronavirus restrictions.

Morrison, who has been a vocal opponent of Northern Ireland's restrictions, made a brief speech at the canceled gig on Thursday night before inviting Paisley to join him in a repeated chant of "Robin Swann is very dangerous".

Management at the hotel blamed the Stormont Government for the cancelations, claiming that they had been given the green light to proceed. Thursday's concert was replaced by a dinner and a video of a previous Van Morrison gig.

"Robin Swann has got all the power, he is keeping us in this over 15 months," Morrison shouted at the crowd before inviting Paisley on stage.

This is Extra ordinary . pic.twitter.com/M0jmA0JIf2

Ulster Unionist leader Doug Beattie described the chanting as "disgusting" and said that both Paisley and Morrison should be ashamed of themselves.

"Having watched the video of Ian Paisley and Van Morrison's antics on the stage of the Europa Hotel in Belfast, I am absolutely disgusted by what I saw," Beattie said.

"They should be ashamed of themselves. Two grown men who should know better, engaging in a very personal attack on Northern Ireland's Health Minister."

However, Paisley, Jr attempted to clarify his actions in a statement the following day: "What was parody, comedy, banter, and sarcasm should not be blown out of all proportion.

“I certainly don’t believe Robin is dangerous. I think the parody and sarcasm of that comment is obvious! Remember last year the Department of Health labelled a song dangerous and I think Van is entitled to parody that. There is a balance in all of these matters and at times we get them right and at times wrong.

“We are all entitled to our own views on how the lockdown has been managed. I’m sure some will take offence - as with all things- but none was intended on my part.”