First taking up residence in the Silverstream Priory in 2012, the monks received approval from the Holy See earlier this year. 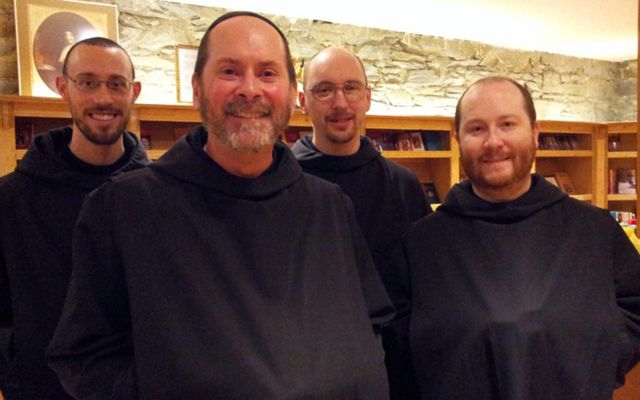 An Oklahoma Catholic Benedictine community has opened what may be the first monastery to open in Ireland since 1536.

The religious community in the priory has been steadily growing since 2012 and prior Dom Mark Kirby told the National Catholic Register “hardly a day passes when I do not receive a vocational inquiry."

The story of the monastery’s establishment in Ireland begins with Dom Mark himself, who, akin to Ireland’s patron Saint Patrick, felt he was drawn towards the promotion of the Church in Ireland.

He tells of how a prayer came to him during a layover in Dublin airport in 2005 when he found himself saying, “Lord, let me do something for the Church in Ireland.”

He placed that thought aside for a while, but when he met with Irish people at a conference in Rome in 2011 they invited him to Ireland to establish a Benedictine community that they felt would be of benefit to the country.

“The invitation to consider Ireland touched me deeply, because, for several years, I had felt a growing desire to respond to the needs of the Church in Ireland with a humble love,” Dom Mark said.

Dom Mark began his mission in Ireland with the monastery’s other founder Dom Benedict, but their community is now four times as large. The community is young too, particularly in today's Church – all but one of the monks is under 36 years of age.

The community is based in the Silverstream Priory in Stamullen, Co. Meath. Bishop Michael Smith of the Diocese of Meath presided at the canonical establishment of the new monastery in late February 2017, an official start to the ambitious plans of the Benedictines in a country still shaken by the latest revelations in the Mother and Baby Home scandal earlier this year.

Members of the US Benedictine community hope to change this, however, and bring about a revival. They have opened the first Catholic monastery in the Diocese of Meath since all monasteries in Ireland were suppressed by King Henry VIII in 1536.

Last month the monks had their constitution and canonical norms approved by the Holy See. Bishop Smith signed a decree “erecting the Benedictine Monks of Perpetual Adoration of the Most Holy Sacrament of the Altar as a monastic Institute of Consecrated Life of diocesan right in the Diocese of Meath.”

The monastery is believed to have a particular focus on the Divine Office and Eucharistic adoration meaning it will have more of a focus on contemplative prayer over apostolic work.

Once known as the “Land of Saints and Scholars” Ireland’s rich tradition of monastic life reaches far back into the mid-centuries of the first millennium, shortly after Patrick's revival. Monasteries flourished in the early Irish Christian Church. The number of ruins of abbeys and round towers across Ireland is a testament to their influence on Irish history.

Following the dissolution and suppression of monasteries by English King Henry VIII, his successor Elizabeth I and later Oliver Cromwell, the 400 religious houses in Ireland that existed in 1530 had all but disappeared by the end of the 17th century. They never regained the strength they once had.

“The history of religious life has seen many developments over the centuries, and I am delighted to recognize the unique presence of this new monastery in the Diocese of Meath. Through their prayer, study and hospitality, the monks are ‘speaking to the heart,’ and their quiet witness is a reminder that the Lord continues to provide the Church with new gifts and grace,” Bishop Smith said during the mass.

Here's a short clip from the RTE show "Today with Maura & Dáithí":

“Since our arrival at Silverstream in 2012, our Benedictine community has grown steadily, from two to eight members. Two more men, both in their 20s, will enter the novitiate later this spring,” said Dom Mark.

“Our goal is to implant traditional Benedictine life at Silverstream,” he continues.

“This means a close adhesion to the letter and spirit of the Rule [of St. Benedict] and a commitment to the traditional forms of the sacred liturgy in Latin and Gregorian chant.”

While some may question the worth of prayer behind monastery walls instead of other work in the community, Dom Mark believes their mission to be one that’s good for Ireland.

“People often ask me, ‘What good are monks, silent and enclosed behind walls, when so much cries out to be done in our troubled world?’” he said.

“We monks, by remaining faithful to our daily round of liturgical prayer – seven times a day and once in the night – provide the Church, the Body of Christ, with the regular heartbeat of the Divine Office.

“The Church, if she is to be a healthy organism, needs a regular heartbeat. Without the prayer of monks, the Church would suffer from a kind of spiritual cardiac arrhythmia and, over time, slip into a critical lethargy,” he states, declaring that “in us monks, the Church has her heart.”

“So long as there a monks in their choir stalls, manfully singing the praises of God by day and by night, and monks in adoration before the altar where the living Christ is truly present in the sacrament of his love, the Church will be forever young, forever alive and equipped to continue her mission into generations to come,” the prior added.

The monks currently in residence in Silverstream have come from all over the world and have even attracted some converts to Catholicism. Unlike other monasteries, the monks are not completely shut off from the outside world, however, and even use technology to keep in touch with what's going on, sending out newsletters through their website and utilizing the internet in helping them raise funds for a new oratory for their ever growing numbers.