The crew was presented with the highest award for bravery, the Air Medal, having landed in total darkness and low visibility to save a dying sailor’s life. 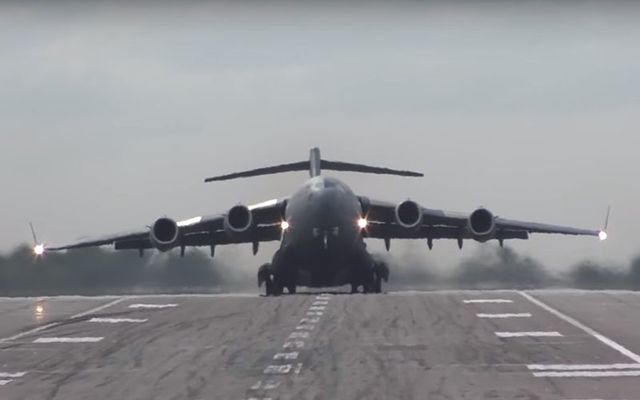 US Air Force crew landed in Shannon to save a dying sailor's life against protocol and received the highest award for bravery. YouTube

The crew nominated for the highest award for bravery, the Air Medal, having landed in total darkness and dense fog at Shannon to save a dying sailor’s life

A  US Air Force crew defied dreadful flying conditions and ignored diplomatic protocol to land a US  Air Force plane, at night, in Shannon Airport, County Clare, last April, in dense fog with a critically injured sailor onboard.

Now the crew is up for one of the highest awards for bravery, the Air Medal, after the incredible landing made in near total darkness with only 30 yards of visibility due to the dense fog.

Air Force Capt. Forrest "Cal" Lampela was the pilot and he knew the critically injured sailor could only be saved by diverting to Ireland and having an ambulance ready at the end of the runway.

The flight code-named “Reach 445”  had originated in Germany. The gravely ill sailor was being brought back to the US for specialized treatment. Halfway across the Atlantic, the sailor began to bleed out and his vital signs began to destabilize.

Even though US Air Force planes have to go through an elaborate protocol to land in Ireland the crew decided to abandon protocol and head for the Irish airport.

They alerted the Shannon authorities who made sure an ambulance was ready.

The Air Medal is awarded to US and civilian personnel "for single acts of heroism or meritorious achievements while participating in aerial flight… in actual combat in support of operations," according to the service. It can also be awarded to foreign military personnel.

Gen. Maryanne Miller, Head of Air Mobility Command (AMC), said in a statement, "The crews of Reach 445 highlight that our incredible airmen are our greatest advantage.

"Sound decision-making and superior care once again bring a hero home to his family," she added.

"We were approximately halfway over the ocean when the patient started to destabilize," Lampela said.

"They couldn't get his blood levels under control… They brought enough blood for the flight, but he was bleeding out in one and, they thought possibly two wounds. So, they didn't have enough blood to keep him stabilized. Secondly, we needed dialysis because his kidneys had failed, so they needed a hospital."

The crew looked at the available options.

"I was probably four hours from the tip of Canada, which even making it to Canada, there was nothing until I hit probably stateside, and I was probably six hours from Boston. I was approximately two hours from Ireland, probably three to England, and [roughly] five hours to Iceland," Lampela said.

Shannon was the destination they decided,  protocol or not.

Military.com reported that “Around 2 am, 60 miles from their approach to Ireland, Lampela got a call from air traffic control that fog had unexpectedly rolled in.

“He decided on a Cat II minimum approach -- meaning the pilot must make a decision whether to land at only 200 to 100 feet altitude.”

He added, "The landing itself was not eventful. But I will tell you, with a patient you have in the back, and going through 200 feet above the ground, and you still don't see anything … you start to get really [anxious and hope] that you see the runway real quick.

"In AMC and in the flying world, we preach this attitude of readiness," Lampela said. "I'm humbled to have been a part of this opportunity.

"We woke up; we weren't expecting this. But because of our training, we were prepared to go out and do this. We were ready to go. And I'm glad it [turned out] OK," he said.

Read more: Ireland from the air - photos taken by the Irish Air Corps