Daryna Kushnir, a Ukrainian woman who has lived in Ireland since she was a child, traveled to the Polish border last Sunday to collect her grandfather who was fleeing Ukraine. 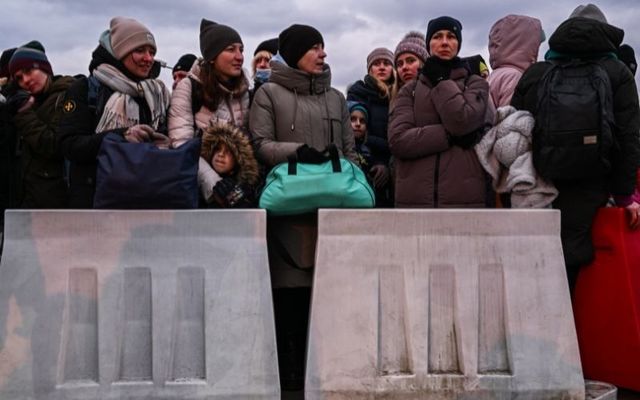 People who fled the war in Ukraine wait in line to board a bus behind removable barriers as Police officers and Polish Territorial defense soldiers help to manage the crowd after crossing the Polish Ukrainian border on March 08, 2022 in Medyka, Poland. Getty

An Irish-based Ukrainian woman who recently collected her elderly grandfather from Poland has described the scenes at the Polish border as something out of a "horror movie".

Daryna Kushnir, who settled in Co Monaghan with her family after she moved to Ireland at the age of seven, traveled to the Polish border last Sunday to collect her grandfather, who had fled from Truskavets near Lviv.

Kushnir told DublinLive that there was a "weird atmosphere" at the border, with hundreds of women and crying babies.

“The tents are warm but it’s horrible, I can’t believe looking at the people, it doesn’t make sense looking at them. It was so strange, it was like a horror movie"

She added that her grandfather's health is declining and said he faced a "difficult journey" to the border.

She said grandfather remained there for several hours before she arrived to collect him, experiencing temperatures of -4C.

Kushnir said her grandfather got through Dublin Airport very quickly once he arrived in Ireland and received his visa stamp within five minutes. He is now staying in the family home in Carrickmacross, County Monaghan.

She told DublinLive that her grandmother and two aunts are still in Truskavets, while an uncle and another aunt are fighting in the Ukrainian military.

"We don’t know much about what is happening with them, we can’t really talk. I’m hoping they stay safe. Their son is only 10 but hopefully, he’ll be okay."

Alex Pishcheiko, a 24-year-old Ukrainian woman living in Ireland, told the Irish Times that she feels "helpless" while her parents sleep in a bomb shelter in Kyiv every night.

"My parents are in Kyiv and they don’t want to leave, I can’t convince them. The war is very close. They sleep in the bomb shelter at night and then go to their apartment during the day," she told the Irish Times.

Pischeiko, whose twin brother is also currently living in Odessa in southern Ukraine, said she was considering going to the Polish border or western Ukraine.

"I’m thinking of going to Poland to people on the border, or western Ukraine. I know that my people need people. . . I can’t sit here."

She said she wants to help thousands of Ukrainian refugees flee the country, even though it would be impossible for her 59-year-old father and her twin brother due to a ban on males aged 18-60 leaving the country.

Pischeiko said she was proud of the men in her life for fighting for their country but added that she hoped they would be safe.

To help aid those fleeing and suffering in Ukraine reach out to the Red Cross.