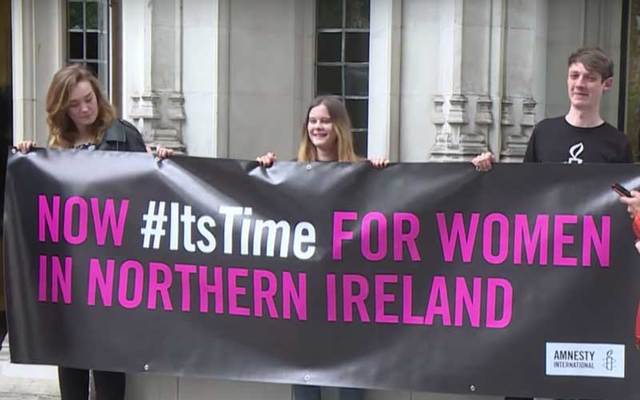 However, despite their strong majority opinion that NI’s laws are incompatible with the European Convention on Human Rights, the Supreme Court justices dismissed a bid to overturn the restrictive abortion laws in a case brought forward by the Northern Ireland Human Rights Commission (NIHRC), ruling the commission had no legal standing.

In a 4-3 vote, the justices ruled that only an individual harmed by the abortion law would have qualified to challenge it, the Belfast Telegraph reports.

“The proceedings were brought in the abstract, without reference to any specific act or individual,” said Deputy Supreme Court president Jonathan H. Mance.

Abortion is illegal in Northern Ireland except where a women’s life is at risk or there is serious danger to her health.

In a lengthy written ruling, Lord Mance stated: "I am, in short, satisfied that the present legislative position in Northern Ireland is untenable and intrinsically disproportionate in excluding from any possibility of abortion pregnancies involving fatal fetal abnormality or due to rape or incest.

"Those responsible for ensuring the compatibility of Northern Ireland law with the Convention rights will no doubt recognize and take account of these conclusions, at as early a time as possible, by considering whether and how to amend the law, in the light of the ongoing suffering being caused by it as well as the likelihood that a victim of the existing law would have standing to pursue similar proceedings to reach similar conclusions and to obtain a declaration of incompatibility in relation to the 1861 Act."

Read More: Will changes to Northern Ireland's abortion law be next?

David Russell, chief executive of the NIHRC, told The Washington Post that despite the dismissal of the case on a technicality, the justices' statement made it “a victory, a historic landmark for women's rights in Northern Ireland.”

Les Allamby, chief commissioner of the NIHRC, said: “The judges made absolutely clear that if a woman was brought forward they would find that our laws are incompatible with human rights.”