Ireland held a referendum that resulted in the overturning of the country's ban of abortion, yet the north of Ireland is still governed by an 1861 law that prohibits women from receiving abortions unless there are life-threatening circumstances. 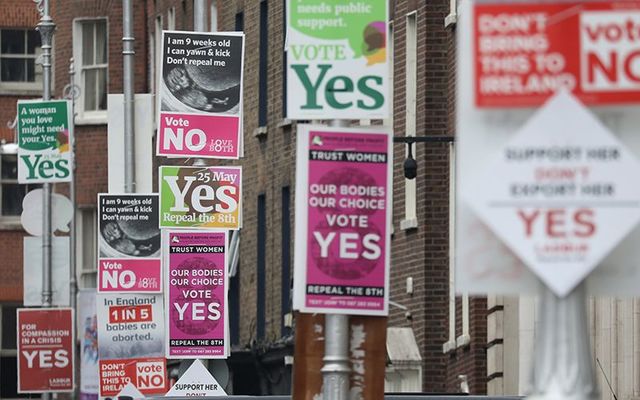 Posters on the streets of Dublin during the campaign for the Eighth Amendment referendum, to change abortion law. Wikimedia Commons

On the 25th of May, Ireland held a referendum in which the country voted to repeal the Irish constitution’s eighth amendment, which had been put in place in 1983 to formally ban the practice of abortion. But what is the situation in Northern Ireland where abortion is almost totally banned?

The country still operates under an 1861 British law that was overturned in the rest of the U.K. excluding the north. Recently a woman was given a suspended sentence for “using poison” i.e. an abortion pill to induce a termination.

Read More: Will Changes to Northern Ireland's abortion law be next?

The matter of abortion is one that was decided upon by the parties at Stormont, the seat of government in Northern Ireland, but according to the Washington Post, the British government would be able to overrule the abortion law since it has the capacity to deliberate on national policy on ‘key’ issues.

Many supporters of abortion have advocated for the British government to consider this a crucial issue of national importance in order for them to step in and make the law coalesce with the rest of the U.K.

One of the primary reasons that abortion is illegal in Northern Ireland is the fact that the largest party, the DUP (Democratic Unionist Party) have consistently expressed opposition to any changes to the abortion law to align with the rest of the U.K.

The current Conservative government coalition with the DUP has left British Prime Minister Theresa May in a tough situation in which she cannot advocate for abortion in Northern Ireland for fear of losing the confidence of DUP members of parliament.

The ironic point is that the DUP claimed they had to enforce BREXIT because they are part of the U.K., but when it comes to abortion it appears they don’t believe that to be the case.