The Coalition of Mother and Baby home Survivors believe there could be as many as 7,000 children buried at nine mother and baby homes throughout Ireland. 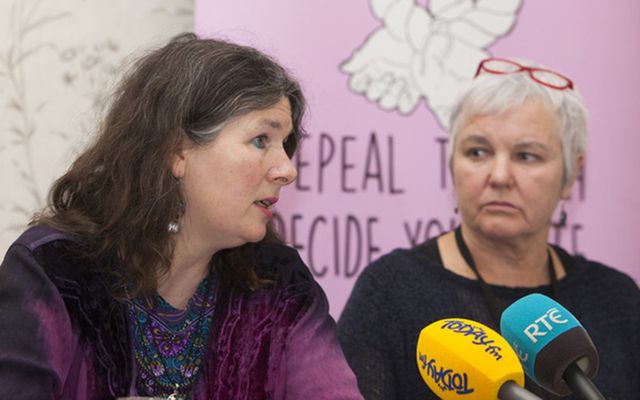 Cllr Deirdre Wadding and Brid Smith TD at a press conference in Buswell's Hotel in Dublin on the Tuam Mother and Baby home scandal. RollingNews.ie

Irish political party People Before Profit (PBP) have called on the Bon Secours Order who ran the Tuam mother and baby home to disband and give up their assets to the Irish state. It was confirmed last week that the remains of as many as 798 infants and children were present in a mass grave in a septic tank in the Co. Galway town where the home operated between 1926 and 1961. The nuns, who still operate two hospitals in Ireland, are being called on to disband and offer up a complete and unreserved apology for their massive cover-up and crimes.

"Bon Secour now run and make lucrative profits from two private hospitals, one in Glasnevin and the other in the University area of Cork. They are a very wealthy organization,” said Bríd Smith, TD for AAA-PBP.

“The order itself should be disbanded and their assets handed over to the State,” she added, stating that their resources should be used to provide compensation to the many affected families.

"They would be two fine hospitals that the State could take over and run, not for profit but for the benefit of everybody.

Smith was joined by Cllr. Deirdre Wadding, a People Before Profit Councillor from Wexford and a former resident of Bessboro mother and baby home in Co. Cork, where a mass grave was also discovered several years ago.

“Church and State colluded from the very foundation of this State to oppress women. Women and children have been brutalized by those twin forces for decades now,” said Wadding, who was sent to the Bessboro home in 1981, aged 19.

"For me it has been a very wobbly few days, to be personal about it, as I read about Tuam it certainly stirred up my own experiences," she added.

Politicians from all of Ireland’s main parties have condemned the discovery with Taoiseach Enda Kenny describing the Tuam mass grave of children born out of wedlock as “truly appalling”. Kenny has said that authorities must now be given enough time to decide how to proceed.

"Well when this first came to light following the analysis done by Miss Corless, the local historian in Tuam, I described the way that babies of single mothers were treated in this country, back in 2014, as being akin to some kind of subspecies,” Kenny told Midwest Radio.

Age of death ranging from 35 wks to 2-3 years in #tuambabies excavation. This is why @ChildRightsIRL sought an independent investigation.

"And obviously the coroner and everybody involved has to see how best we can proceed with the next step in this case, and possibly others,” Kenny added.

"It's a horrendous situation for those whose siblings were treated in this fashion."

Stating that the Commission of Investigation which was looking into the claims of death and cover-ups in the mother and baby homes may be extended if needs be, Kenny continued: "But I think the next step, if I understand this, is for the coroner to move here - but the question is what do you do to attempt to identify the remains of a substantial number of babies between three weeks and three years (old) which have come to light in this case.

"And are there others, in other locations, who were treated in the same fashion?

"So this is another issue - one of many that we have come across in the last number of years - which were left lying in the shadows of an Ireland that we had hoped was gone.

"But I commend the local historian, Ms. Corless, who followed through on this - and now it's beginning to come to light the scale of what actually happened.”

Around 20% of those who died in Bessborough were due to Marasmus (malnutrition) - the main cause of death. On a working farm

Senior government minister Leo Varadkar has also stated his belief that the work of the Commission needs to continue.

"But even by the standards of the time, it is abhorrent to me that children weren't given a proper Christian burial.

"You would have expected at the very least a religious order would have ensured they were treated with dignity in death and that didn't happen."

"Tuam is the tip of the iceberg. It was the fifth biggest of the Mother and Baby homes and some of them like St Patrick's on the Navan road were four times the size,” claims Chairperson Paul Redmond.

"It's a fact that the further back you go, the worse the conditions got.

Should the Bon Secour order disband and hand over their assets to the state? Let us know your thoughts in the comments section.