The American victims of the County Wexford crash have been named locally as the Alexander family from Illinois. 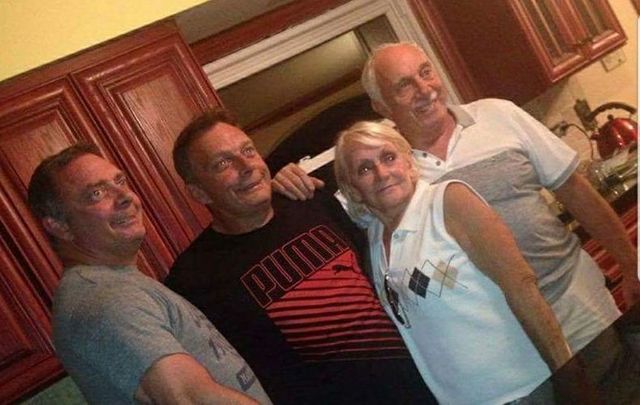 The American victims of the County Wexford crash have been named locally as the Alexander family from Illinois.

The Alexander family was traveling to a relative’s funeral in Co. Wexford when their car was struck by a tractor-trailer.

The American family of four who lost their lives on Monday in a horrific car accident in Co. Wexford has been named locally as the Alexander family from Illinois.

Tributes are being paid to father-of-two Steve Alexander, 49; his brother Doug Alexander Jr., a 52-year-old father of one; and their parents Lily and Doug Sr., after they were involved in a fatal two-vehicle collision yesterday afternoon in Ireland.

The family were traveling from Shannon Airport to the wake of Lily’s sister Winnie Keevey on Monday when their BMW 5 series rental car was involved in a collision with a tractor-trailer [articulated lorry] on the main New Ross-Wexford road.

It is understood that a section of the car was crushed under the second vehicle. Although emergency services used cutting equipment to remove the family from the car so paramedics could attend them, all four were pronounced dead at the scene.

It is now believed the driver of the rental car, thought to be one of the sons, was attempting to make a u-turn when the car was hit. The accident happened on a clear, modern, well-maintained section of road which is clearly marked with no obstructions. There was a hard shoulder on either side and a two-meter wide central preservation area in the center of the road that drivers are not allowed to enter.

Emergency personnel at the scene of the crash believe the Alexander's car to have entered the hard shoulder on the left and paused before taking a hard swing right as if to travel in the opposite direction.

It was hit with force by the truck, however, and when they came to a standstill at the far side of the road, the car was obliterated.

“Did he look over the wrong shoulder," asked a first respondor at the scene, claim the Irish Times, questioning whether the US versus Irish driving habits had been the reason for the move.

“It’s impossible to know but it just doesn’t make sense.”

It is reported that the younger brother Steve Alexander was a police officer in a suburb of Chicago and was the father of two daughters, aged eleven and ten.

“I can never express the happiness Steve gave me,” his partner Susan Schulze wrote on Facebook. “He showed me true love. I am so blessed that to be a part of his life. I love you Steve and I will love you forever and a day.”

His colleagues at Bolingbrook Police Department have also paid tribute to the police officer and his 17-year service, revealing that he taught self-confidence and self-defense to women and girls, talked to children about vehicle and driving safety, and was nominated for Police Officer of the Year in 2014 and 2015.

“Steve devoted his time to the community and taught self-defense classes and self-confidence skills to women and girl scouts at the Bolingbrook Park District,” Lieutenant Anthony Columbus said to the The Irish Times.

“He also enjoyed racing his vintage Camaro drag racing car and talking to children about vehicle and driving safety.”

Irish Gardaí [police officers] are currently investigating the crash. Both vehicles were traveling eastward toward Wexford and it is understood the car was turning right at the time of the collision. The impact was on the driver’s side.

The driver of the truck and the passenger in the tractor-trailer were not injured but treated for shock.

On Tuesday, the funeral of Lily’s sister took place and the family grieved further for the four recently deceased realtives. Lily was a native of Limerick but had emigrated to Illinois where she raised her family.

“We’re just very shocked and saddened. The whole community is numbed by the tragedy and we offer our prayers for the family and friends,” Fr Devereaux told mourners at the service.

“The people who died were coming to attend this funeral. It’s terrible that family members and friends in America now have to cope with this news coming from so far away.”

“I am devastated at the news and the loss of my friend and his family,” a friend of Doug Jnr., Lisa Millesch, told the Irish Mirror.

“This is an unimaginable tragedy."

The Alexander brothers and their parents.

New Ross county councilor Michael Sheehan spoke about the shock the town was  experiencing while paying tribute to the emergency services who arrived quickly at the scene.

"If you walk around town this morning everyone is very upset. All everyone is saying is how shocked they are at what has happened. The Keevey family are very well known and respected. They were getting ready to bury their mother and now another four members have been killed.

"It is of course a tragedy at any other time of the year but particularly in the lead up to Christmas, a family time, it simply compounds the tragedy and their grief. They family are now gathering to bury four relations when they are already grieving for their mother. They had just arrived here yesterday morning and were driving to Lacken for a prayer service for her (Lily) sister.

"I could see how a crash could easily happen there,” he continued. “You could miss that turn in the blink of an eye. There has been a lot of praise for the emergency services. They were on the scene within minutes. Gardai, the fire service and ambulances came from New Ross, Wexford and Waterford.

"My thoughts are with them also. It is very difficult for them to come to a scene like that and then have to carry on with their work afterwards."

Gardaí are appealing for witnesses who may have witnessed to crash  to contact New Ross Garda station on 051 426030, the Garda Confidential Line on 1800 666 111 or any Garda station.

'Tis the season! Festive and fun things to do in Ireland this winter
How much did Jackie know about John F. Kennedy’s affairs?
Kathleen 'Kick' Kennedy - the scandalous, rebellious, and tragic life of JFK’s sister
JFK's Secret Service agents were too hungover to react in Dallas, says author
JFK Jr.'s heartbreaking salute to his father's coffin
Gobble up your Thanksgiving leftovers with this hearty turkey pot pie recipe
Titanic hero Irishman Thomas Andrews epitomized bravery as ship went down
Eyewitness account of a Great Famine workhouse on Christmas Day 1847
Ireland at Christmas: Our readers share their wonderful and magical memories