With 47 seats out of 90 filled, Sinn Féin has won 18 seats compared to the 12 seats won by the Democratic Unionist Party and eight won by the cross-community Alliance Party. 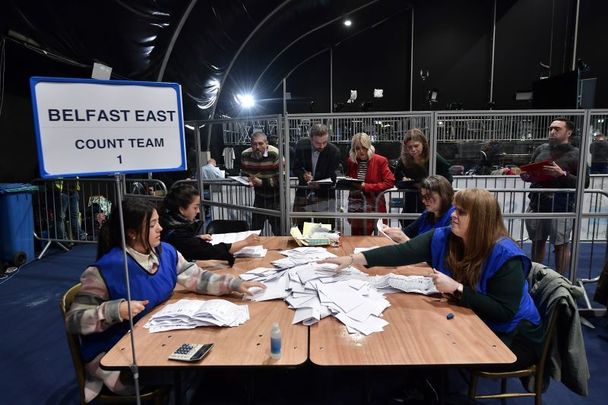 Sinn Féin is set to win the most seats in the Northern Ireland Assembly for the first time ever following a historic election on Thursday.

With 47 seats out of 90 filled, Sinn Féin has won 18 seats compared to the 12 seats won by the Democratic Unionist Party and eight won by the cross-community Alliance Party.

Sinn Féin is on course to become the first nationalist political party to nominate a Northern Irish First Minister. A unionist party has been the largest in Northern Ireland's government since the foundation of the state in 1921.

Sinn Féin received 250,388 first preferences in this year's election compared to the 224,245 votes it received in the 2017 Assembly elections.

Meanwhile, the DUP has experienced a sharp decline in support, receiving 184,002 first preference votes this year, representing a drop of about 42,000.

The DUP won 28 seats in the 2017 elections, narrowly beating the 27 seats won by Sinn Féin.

The Ulster Unionist Party, which won 10 seats in 2017, has won four seats so far in this year's election, while the Social Democratic and Labour Party (SDLP), which won 12 seats five years ago, has won just three after a poor performance in the polls.

The Traditional Unionist Voice (TUV) has won one seat, while one independent unionist has also been elected.

Although Sinn Féin will almost certainly win the most seats in this year's election, the historic election of Michelle O'Neill as First Minister depends on whether the majority of unionist assembly members agree to power-sharing.

Northern Ireland operates under a system of mandatory coalition and DUP leader Sir Jeffrey Donaldson has said that he will not be nominating any ministers to the executive until the issue of the Northern Ireland Protocol is resolved.

The Protocol, which was introduced during the Brexit Withdrawal Agreements, aims to prevent a hard border on the island of Ireland and has created a de facto trade border down the Irish Sea.

Unionist communities and politicians have voiced opposition to the Protocol as they believe it has undermined Northern Ireland's position within the United Kingdom.