Sinn Fein's Gerry Adams and Bobby Storey were recently targeted in coordinated attacks on their homes in Belfast. 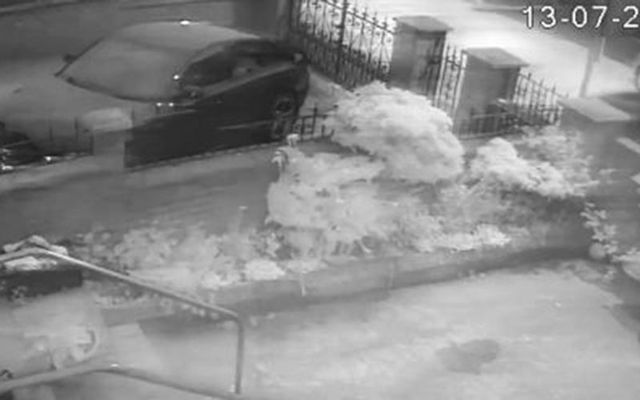 Irish republican and former Sinn Féin president, Gerry Adams, was recently under attack at his family home in West Belfast by dissident republican thugs as shown in newly-released CCTV footage.

He and senior republican Bobby Storey both faced attacks, which prompted a rally organized by Sinn Féin to take place in Belfast in solidarity with the two and in opposition to politically-motivated violence.

The incidents happened around 10:50pm on Friday, with what has been described as “loud bangs” occurred at both the Adams and the Storey residences.

The PSNI (Police Service of Northern Ireland) have not disclosed the exact location of the attacks, other than that they were at their homes. They stated they, “take into account requests from victims of crime regarding the detail released and the wider impact this could have.”

According to The Journal, the police are also not willing to speculate the nature of the incidents, whether they were coordinated at the same time or were carried out by the same suspect(s).

'We're not going to be intimidated' - @MaryLouMcDonald on attacks on Gerry Adams' and Bobby Storey's homes:https://t.co/x2F9CF79uy pic.twitter.com/jux1KIMVQ6

The footage shows a car passing Adams’ home, with a spark on the house following as an explosive device hit a vehicle in his driveway. The device blew up and dust arose from the car quickly after.

Only ten minutes before the attack, two of Adams’ grandchildren were standing in the driveway. He was “very, very thankful” that they were not injured.

Adams stated at a press conference on Saturday that he suspects the upsurge in violence in Derry as a result of the 12th of July may be linked to this.

“Obviously those who were involved, like the people that were out in east Belfast or out in Derry, have their own agenda in all of this.

Rally in solidarity with the families of Gerry Adams & Bobby Storey after attacks on their home - tonight, 7.00pm at Andersonstown Barracks #NotInMyName pic.twitter.com/ua46cXpzm3

“For those who were involved in the attack, if they have the gumption to sneak up on our homes, I’d like them or their representatives to come and meet me. I’d like them to sit down and explain to me what this is about.”

Adams called upon those who are encouraging or committing acts of violence in Derry and other parts of the north of Ireland to discuss their reasoning.

These actions were also condemned by hardline republican group Saoradh, who stated: “they serve no purpose and fail to advance republican objectives.”

Read More: Gerry Adams dares those who bombed his home to come speak with him