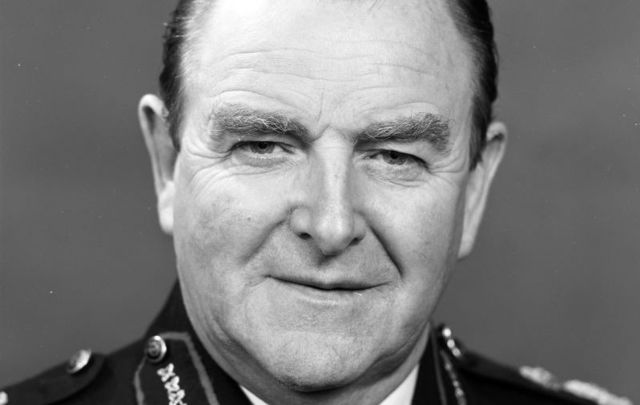 A former RUC chief constable who served during some of the most violent years of the Troubles believed that a united Ireland was inevitable, according to a new book.

Sir Jack Hermon, who served as Chief Constable of the Royal Ulster Constabulary (RUC) between 1980 and 1989, was strongly against any further integration of Northern Ireland into the United Kingdom, according to a posthumous memoir by senior British diplomat David Goodall.

"The Making of the Anglo-Irish Agreement of 1985" details a meeting with Hermon in January 1984, when the then-RUC chief revealed his thoughts on a united Ireland.

"In the long term, he thought the unification of Ireland in some form or other was inevitable, and he was strongly against any further integration of the province into the United Kingdom," Goodall wrote in the memoir.

Hermon, who was born in Antrim and died in 2008, oversaw a series of "shoot to kill" RUC operations during his stint as chief constable, leading to allegations that republican suspects were being shot rather than arrested.

In the lead-up to the Anglo-Irish Agreement of 1985, Hermon invited Goodall to be a guest at RUC headquarters and invited him to visit stations along the border.

Goodall remarked that he expected Hermon to be "dour and cautious" but that the RUC chief turned out to be "remarkably frank".

Goodall, who died in 2016, played a crucial role in the signing of the influential Anglo-Irish Agreement in 1985.

The diplomat's memoir details the background story of the signing of the historic agreement, which was bitterly opposed by unionists because it allowed the Irish Government unprecedented involvement in Northern Irish affairs.

Goodall's posthumous memoir also reveals that former British Prime Minister Margaret Thatcher considered a Cromwellian style removal of Catholics from Northern Ireland, stating that Thatcher asked if people belonging to a community who did not wish to remain under British rule to the Republic of Ireland.

"At this point, the silence around the fire became transfused with simple bafflement. After a pause, I asked if she could possibly be thinking of Cromwell.

“Well, prime minister, Cromwell’s policy was known as ‘To Hell or Connaught’ and it left a scar on Anglo-Irish relations which still hasn’t healed”. The idea of a population transfer was not pursued," Goodall wrote.