Robyn Peoples and Sharni Edwards have become the first same-sex couple to get legally married in Northern Ireland. 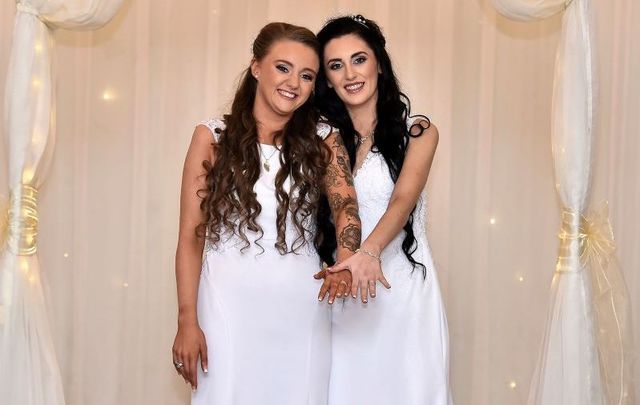 Robyn Peoples (L) and Sharni Edwards after they became the first same-sex couple to legally get married in Northern Ireland. Getty Images

Robyn Peoples and Sharni Edwards have officially become the first same-sex couple to get legally married in Northern Ireland after their ceremony on February 11 in Carrickfergus, Co Antrim.

This week was the first time ever that same-sex couples could get legally married in Northern Ireland after landmark legislation was passed last year. Northern Ireland was the only part of the UK where same-sex marriage was still not legal.

Peoples, 26, and Edwards, 27, say the timing of their nuptials is purely coincidental and that they had chosen February 11 as it was their anniversary. The couple had booked their event at the Loughshore hotel in Co Fermanagh before the legislation moved in their favor last year.

Edwards said: “We didn’t expect to be the first couple, it’s coincidental.

“Today is our six-year anniversary so we wanted to go ahead with a civil partnership but when the bill was passed it was perfect timing and it was a complete coincidence, a happy coincidence. We couldn’t be more grateful.”

Ahead of their wedding, Peoples said she and Edwards were sending a message to the world that "we are equal."

"Our love is personal, but the law which said we couldn't marry was political.

"While this campaign ends with Sharni and I saying 'I do', it started with people saying 'No' to inequality. By standing together, we've made history."

At her wedding ceremony, Peoples told reporters, "our love is equal."

'Our love is equal to a man and a woman'

Robyn Peoples says her marriage to wife Sharni Edwards is 'no different' after they became the first same-sex couple to marry in Northern Ireland https://t.co/LrAhAdl1LW pic.twitter.com/YqwAai6vuq

The couple expressed their gratitude to activists, including Love Equality NI and Amnesty International, who helped make their marriage possible.

Peoples said: “For Northern Ireland, we need to be the face of the people to show everyone it’s OK. We fought so long and hard for this opportunity to be seen as equal and now we are here and it’s just amazing.”

Edwards added: “We feel humbled that our wedding is a landmark moment for equal rights in Northern Ireland. We didn’t set out to make history – we just fell in love.

“We are so grateful to the thousands of people who marched for our freedoms, to the Love Equality campaign who led the way, and the politicians who voted to change the law. Without you, our wedding wouldn’t have been possible. We will be forever thankful.”

Read More: Murdered Irish journalist wrote an extraordinary letter about being gay to her 14-year-old self

Poignantly, Peoples and Edwards shared a kiss in front of a mural of Lyra McKee in the days before their historic wedding.

Sharni Edwards and Robyn Peoples - the first couple who will have a same sex marriage ceremony in Northern Ireland - share a kiss at the Lyra McKee mural in Belfast. pic.twitter.com/K2Pi4cKXOF

McKee’s partner Sara Canning was in attendance at Peoples and Edwards’ ceremony and told reporters: "What a wonderful moment in our history.

"This really means so much and has brought me some much-needed light in what has been a dark year,"

"I know Lyra would have been so overjoyed to see this day. She was a strong advocate for equal marriage and we both took part in the marches organized by the Love Equality campaign.

"Of course, this historic moment is a little bitter-sweet. It had been our dream too.

"Lyra and I should have been an engaged couple now, planning our own wedding day.

"But I am so happy for Robyn and Sharni, the first couple to marry under the new law. We've been in touch in recent days and I'm delighted for them and for all the other couples who will follow."