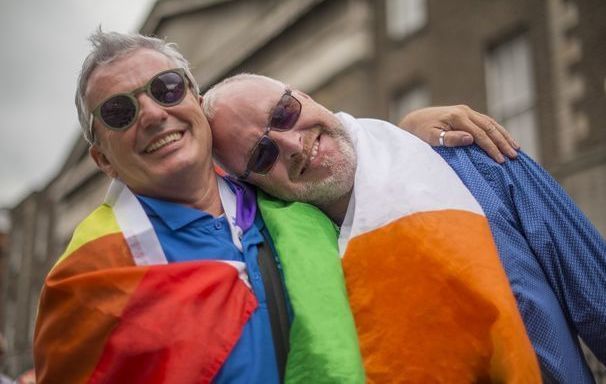 Valentine's Day week 2020 will be especially special for same-sex couples in Northern Ireland as the very first legal same-sex marriages will begin to take place.

From Monday, January 13, same-sex couples will be able to register for marriage in the state, meaning the first ceremonies will begin to take place in a month's time.

Those already married will now have that marriage recognized but those in a civil partnership will not be able to convert it to marriage at this stage.

The matters of same-sex marriage and abortion had previously been deemed to be a “devolved matter” in British Parliament, meaning it should be left up to Northern Ireland’s Assembly to decide.

As of today, Marriage Equality is legal in the North as LGBTQ+ citizens can register their intent to marry.

Today belongs to you, the people.

It belongs to all of you that have campaigned relentlessly for LGBTQ+ rights for decades.

This is an historic day for equality. pic.twitter.com/7D7AkscJ0w

However, with no Assembly in place for more than two years in Northern Ireland, backbench members of the British Labour party argued that the two issues can no longer be ignored.

While the Northern Ireland Assembly at Stormont finally returned after a three-year absence this week, the October 21 deadline had already been missed allowing for same-sex marriage to become legal on January 13.

"It's a good day for Northern Ireland, an important day for citizens' rights across these islands and an exciting day for same-sex couples who can now register to marry."

I'm glad to see marriage equality is now legally recognised in Northern Ireland, starting from today. It has been a long time coming, but it is an important and positive example of the progressive, inclusive society that can be created. @labourlgbt https://t.co/MsWitoMnEu

Same-sex marriages have been allowed in England, Scotland, and Wales since 2014, but Stormont did not legalize them.

The Republic of Ireland legalized same-sex marriage in 2015 after a historic referendum saw the Yes campaign winning by a landslide.