The Irish language element of a new “Welcome to Newry, Mourne and Down” sign was daubed in graffiti in an incident that police in Northern Ireland are treating as a hate crime. 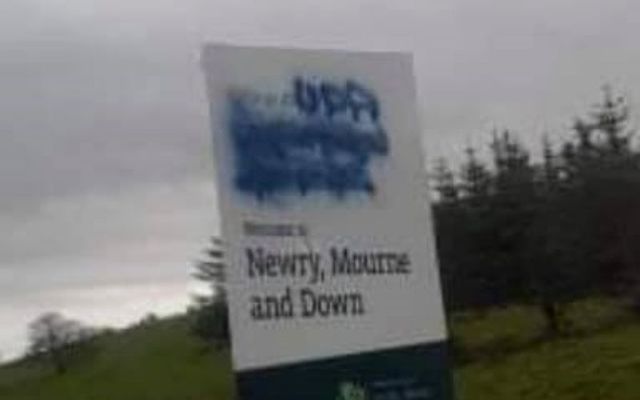 A south Armagh councillor has hit out at “idiots” who take “offense at the Irish language” after a bilingual sign was defaced in Newtownhamilton.

The Irish language element of a new “Welcome to Newry, Mourne and Down” sign was recently daubed in graffiti in an incident that police in the North are treating as a hate crime.

Local Sinn Féin councillor Barra Ó Muirí has used the incident to encourage people to “try and be more tolerant and respectful of one another”.

A report was made to police on Wednesday, October 27, shortly before 4.45 pm, that a bilingual street sign had been defaced on the Keady Road in Newtownhamilton.

In images posted on social media, the Irish part of the sign is covered in spray paint and the letters “UDA” can be seen.

It's believed this damage was caused sometime over the weekend, between Friday, October 22, and Sunday, October 24.

Councillor Ó Muirí says the incident comes “in spite of all the great community work that goes on in the town”.

However, in a post on social media, he added: “There are still those who wish for Newtownhamilton to be defined as a divided community. Shame on them!”

The Sinn Féin councillor says “languages, creed nor ethnicity should offend or threaten anyone in today’s society”.

He also assured the community that the graffiti will be removed shortly.

Diarmuid Pepper is a journalist based in the South Armagh region.