Surfers in Ireland were treated to a once-in-a-lifetime experience when they came face-to-face with a school of more than 20 basking sharks up close off the coast of County Clare. 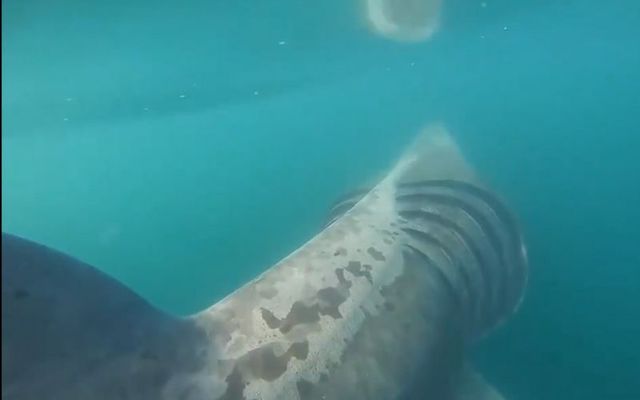 The surfers encountered at least 20 sharks off the coast of Ireland. @rayofoghlu, Twitter

Surfers in Ireland were treated to a once-in-a-lifetime experience when they came face-to-face with a school of more than 20 basking sharks up close off the coast of Co Clare.

Ray Foley, Patch Wilson, Tom Gillespie, and Joao Tudella swam with the magnificent sharks for two hours on Saturday, May 2, around 200 meters off the coast of Clare.

The four surfer friends filmed the jaw-dropping footage on Gillespie's GoPro on Saturday morning in the brilliant blue waters of the Atlantic Ocean.

Around two dozen basking sharks swam back and forth in the company of the four lucky surfers.

Basking shark hangs this morning! 😳 Trying our best not to look like planktons

The four friends had seen an occasional basking shark while surfing in the past, but never in the numbers that they saw on Saturday.

Gillespie told Breakingnews.ie that they had heard basking sharks were feeding in a bay within two kilometers of their homes. He said that they decided to head out to sea with their surfboards to see if they could catch a glimpse of the harmless sharks.

It's fair to say they got more than a glimpse.

"I’ve been surfing since I was 15 and occasionally you’ll see one or two, but I’ve never seen that many," he told Breakingnews.

Gillespie said that their only concern was to make sure that they didn't look like plankton.

Ray Foley also shared the footage on his Twitter account and said: "We were mostly stationary and they'd just cruise past, mouths agape."

Happy to say this was my morning. Just down the road from the house with two good friends.

The bay was full of sharks. We estimated 20+

Swam with them for two hours. It was completely surreal.

We were mostly stationary and they'd just cruise past, mouths agape. pic.twitter.com/2SNUFRk8uD

Basking sharks are one of three plankton-eating sharks and are extremely unlikely to ever attack a human, even by accident.

Basking sharks typically swim in large schools, so there is nothing unusual about such a large congregation of the benign shark.

Read more: WATCH: A 25-foot shark has been taking daily swims off the Irish coast