Surge in support for Fine Gael in new opinion poll 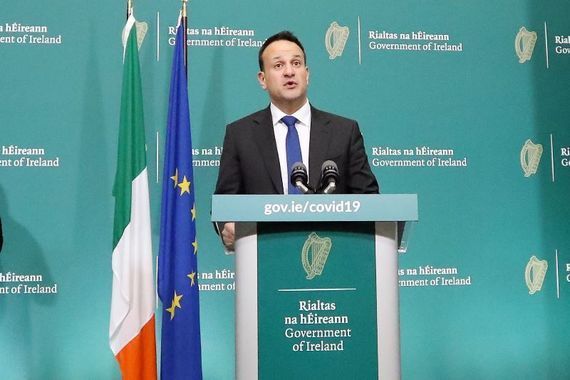 Fine Gael has surged ahead in the new opinion poll. Rolling News

A new opinion poll shows that support for Fine Gael has surged in response to how the party is handling the COVID-19 crisis.

The opinion poll, conducted by the Business Post/Red C, has Fine Gael out in front as Ireland's most popular political party ahead of Sinn Féin with 28% and Fianna Fáil with 18%.

Sinn Féin also made gains of 3% in the new poll while Fianna Fáil dropped 4%.

Fine Gael was the third-most-popular party in February's general election with 21% of the popular vote. The party won 35 seats in the election compared to Sinn Féin's 37 and Fianna Fáil's 38, although Fianna Fáil was guaranteed to win one seat because Sean O'Fhergail was returning as Ceann Comhairle.

Sinn Féin received 24.5% of the popular vote - the most of any party - but has been unable to form a government since both Fine Gael and Fianna Fáil have ruled out entering into a coalition with them.

Fianna Fáil and Fine Gael have entered into coalition talks recently but have yet to form a government.

As a result, Fine Gael has remained in government throughout the COVID-19 crisis as an acting government. The party has retained all of its ministerial positions and enjoys unlimited and exclusive access to the national media as a result.

The party has imposed strict measures to curb the spread of COVID-19 and seems to have made a good impression on Irish voters.

The poll was conducted over a five-day period between March 20-25, shortly after Taoiseach Leo Varadkar gave a national address about the crisis on St. Patrick's Day. The poll surveyed 1,000 voters and has a 3% margin of error.

Read more: “We are in this together” - Irish leader delivers historic State of the Nation