Trick or treaters in Ireland may need to bring along umbrellas on Halloween as Tropical Storm Pablo is set to deliver rain and wind this week. 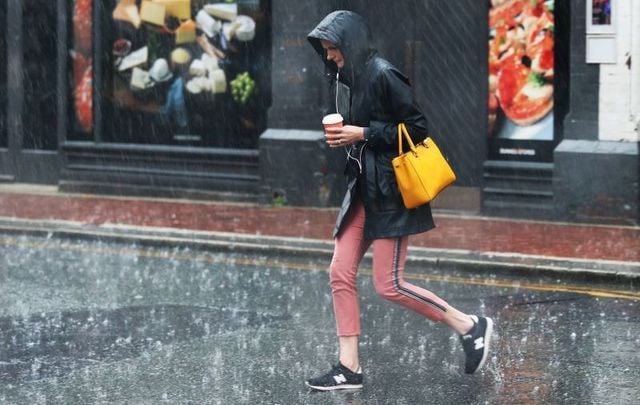 Tropical Storm Pablo will deliver rain and wind to Ireland this week. RollingNews.ie

Tropical Storm Pablo is not forecast to hit Ireland directly, but the country will feel some of its effects with heavy rain and wind in the coming days.

Tropical Storm Pablo, which was briefly declared a hurricane by the US-based National Hurricane Service on Sunday, is a historic storm as it is considered the farthest east ever a tropical cyclone reached hurricane strength over the Atlantic

On Sunday, Met Eireann meteorologist Joanna Donnelly said that “something quite interesting is happening.

"Out to the west of Iberia, we see tropical Storm Pablo. It is an intense area of low pressure sending out bands of rain. Over the next few days, it is going to try to track northwards but we have got high pressure through Sunday, Monday and much of Tuesday keeping the remnants of Tropical Storm Pablo to the south of us.

"But then, by the middle of the week, it is going to merge with a large area of low pressure and finally start to make progress up across the country into Tuesday night and into Wednesday pushing slowly eastwards during Wednesday with strong winds too.

"Now this is tropical in nature so a lot of moisture in there so some of that rain could be heavy through the midweek period.”

On Monday, Met Eireann shared this outlook for the coming days in Ireland:

Summary: Very unsettled from Midweek onwards, with occasional showers, or longer spells of rain. Mild at first, but turning cooler over the weekend.

Tuesday night: Breezy and mostly cloudy, with outbreaks of rain extending from the south and southwest, affecting mainly Munster, Connacht and south Leinster, with some heavy bursts along the south coast. Mainly dry elsewhere, but some patchy light rain or drizzle may occur. Min. 4 to 8 Celsius, in moderate to fresh east to southeast winds.

Wednesday: Wet and windy, with rain extending to all areas, the rain heavy in places, especially in southern and western coastal areas. Mainly dry conditions will develop in the southwest in the afternoon and will extend gradually to all parts during the evening and early night. Fresh to strong southeasterly winds on Wednesday will gradually veer southwest to south and ease as the rain clears. Maximum temperatures 10 to 13 Celsius generally, but 13 to 15 degrees in the southwest. Dry in most areas overnight, but scattered showers will occur in Atlantic coastal areas, becoming heavier and more widespread in Connacht later. Mild, with no frost.

Thursday: Some bright spells, but mostly cloudy, with showers, merging to give longer spells of rain in places. Mild, with maximum temperatures of 12 to 15 Celsius, in mostly moderate southwesterly winds. Mild overnight, with rain extending from the south, but it is likely to remain mostly dry in the northwest and north.

Friday and weekend: Remaining changeable and unsettled. Turning cooler over the weekend, with a risk of some frost in places, especially on Saturday night.