Met Éireann has issued weather advisories as a potato blight warning as Storm Ellen is set to track over Ireland. 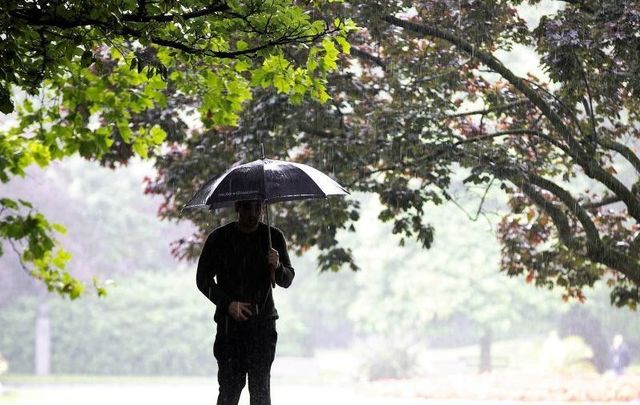 August 19, 2020: A person walking through Dublin City during heavy rain as the country braces itself for Storm Ellen which will track across the country later this evening. RollingNews.ie

Met Éireann issued several weather warnings and advisories, as well as a potato blight warning, this week as Storm Ellen is set to track across Ireland.

"Due to the combination of storm surge, spring tides, and onshore winds, there is a risk of some coastal flooding. There is a risk also of some inland and river flooding with some potentially heavy, thundery downpours."

Cusack continued: "Ellen is forecast to move over the southwest of Ireland Wednesday evening, tracking northwards over the country during Wednesday night and daytime Thursday. Gusts generally of 80 to 100km/h can be expected and potentially gusts may exceed 130km/h in some exposed coastal and mountain locations and some lower locations due to funnelling effects."

She added: "With trees in full leaf and peak numbers on holidays in Ireland, impacts could be significant with damaging winds, heavy rain, and large waves along the coast. Strong winds overland, high, potentially dangerous, waves can occur on lakes as well as along coasts and over high ground.

"Storm Ellen is the fifth named storm from the Met Éireann, UKMO, and KNMI storm list of 2019/2020. It is the sixth named storm overall as the first one, storm Lorenzo, was named by the National Hurricane Center. Lorenzo originated as Hurricane Lorenzo, the easternmost and northernmost category 5 hurricane ever recorded in the Atlantic Ocean but weakened considerably as it stalled off the northwest coast and produced few impacts as it tracked over Ireland on Friday, October 4th, 2019."

Here are the weather warnings that Met Éireann has in effect for Ireland at the time of publication on Wednesday, August 19:

Between 9 pm and midnight Storm Ellen will produce a core of very severe and destructive winds.

Storm Ellen will track over Ireland this evening and tonight bringing severe and damaging winds.

Heavy rainfall and storm surge will result in some flooding.

It will become very windy this evening and tonight, with severe gusts likely. Some flooding likely also, especially in coastal areas.

Storm Ellen is expected to bring a spell of very strong winds to Northern Ireland during Thursday morning.

Gale to storm force winds, southeast veering southwest, this evening and tonight on all Irish coastal waters and on the Irish Sea. Winds will reach violent storm-force 11 for a time on coasts from Carnsore point to Valentia to Slyne Head.

Strong winds at times may result in unsafe conditions and some disruption, especially over high ground, lakes, and sea areas. There is also a risk of flooding.

Weather conditions favourable to the spread of Potato Blight will occur across all of Ireland this week.