Ireland looks set to be in for a blustery Halloween. 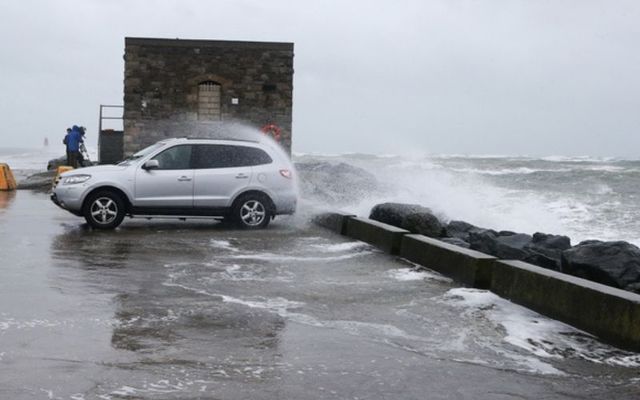 A car is showered in sea spray as Storm Brendan hits in January. Rolling News

Ireland's meteorological service has issued a Status Orange weather warning for Saturday with gusts of up to 130km/h forecasted in parts of the country due to Storm Aiden.

Met Éireann has issued a Status Orange wind warning for 12 counties in Ireland throughout the day on Saturday, while a Status Yellow wind warning has been issued for the entire country on Saturday until 3 p.m.

Met Éireann has imposed orange warnings on Galway, Mayo, Sligo, and Clare from 8 a.m. until 4 p.m. on Saturday, while a separate orange warning will be in place in Carlow, Kilkenny, Wexford, Wicklow, Cork, Kerry, and Waterford from 5 a.m. to 10 a.m.

Storm Aiden is expected to bring winds of between 65km/h and 80km/h with gusts of up to 130 km/h and a Status Yellow wind warning has been issued for the entire country on Saturday between 1 a.m. and 3 p.m.

#StormAiden has been named by Met Éireann for Halloween. Orange & yellow wind warnings are in effect for Sat. Potential for severe & damaging gusts.

Satellite below shows the position of #StormAiden in the Atlantic pic.twitter.com/mblYdArK0B

Met Éireann is warning of "severe and damaging" gusts in the 12 counties where orange warnings are in place.

The meteorological service had previously warned of heavy rain leading to river flooding over the weekend. Met Éireann also warned of coastal flooding due to a combination of low pressure, high tides, and onshore winds.

Storm Aiden could add up to 0.6 meters to tides and swells in Cork, which has been badly affected by flooding in recent weeks, and Met Éireann said that there is a further risk of flooding in Bantry and Ballycotton at high tide in the early hours of Saturday morning.