Gosford Castle, which was used as Riverrun in 'Game of Thrones,' has officially been purchased for an undisclosed amount. 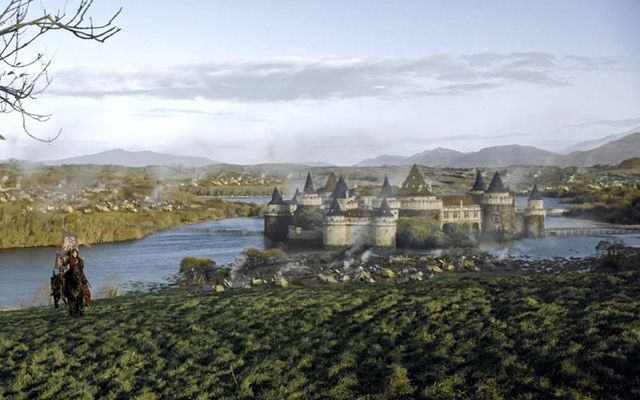 The 19th-century Gosford Castle in County Armagh, aka Riverrun in Game of Thrones, has been sold for an undisclosed amount

Gosford Castle, in County Armagh, Northern Ireland. which was used as Riverrun in HBO’s Game of Thrones is officially off the market. While those behind the sale Maison Real Estate have declined to comment on the sale it was on the market for £500k ($648k).

The 19th-century castle in Ireland used to shoot exterior scenes during the HBO series' third season was on the market for less than a year.

Jeremy Baird, a real estate agent at Maison, confirmed to FOX Business that Gosford Castle was used in the third season of ‘Game of Thrones,’ which is currently airing its final season.

Gosford Castle as Riverrun in Game of Thrones (HBO)

“The scene of the execution of Rickard Karstark, who is beheaded by Robb Stark in the episode “Kissed by Fire,” also took place here,” Baird said.

While the Maison website lists Gosford Castle as “sold,” it is unclear what the final selling price was. The asking price for the 15-bedroom castle was £500,000 (nearly $650k).

The Gosford Castle was originally built for The Second Earl of Gosford and was designed by London architect Thomas Hopper. During World War II, the castle was used to accommodate troops and prisoners of war.

The estate was later purchased by the United Kingdom's Ministry of Agriculture to create a Gosford Forest Park. It then fell back into military use before being run as a hotel, from 1983.

In 2006 the castle was bought by Gosford Castle Development Limited group who forward a $5 million proposal to restore the building into 23 luxury residences.

Gosford Park exterior as featured in Game of Thrones.

According to Maison, the restoration was “undertaken by artisans and craftsmen with a focus on retaining the character and historic integrity of the castle.”

When the Game of Thrones County Armagh property on the market, Maison Director Ciaran McGurgan, told Armagh i,  “The portion of the castle being marketed for sale at this point has been partially developed in places with a view to convert the space into six luxury apartments with each boasting an average space of 3,500 sq ft and with some offering rooftop gardens.

A still from the second seige of Riverrun, in Game of Thrones.

“A potential purchaser could also invest with a commercial direction in mind as the buildings have been used previously as a hotel and as a movie set for the world famous ‘Game of Thrones’ TV show.

“The possibilities are endless and only on inspection can this castle and its beautiful location be truly appreciated.”

The news of the castle’s sale comes just after ‘Game of Thrones’ aired it's epic 'The Long Night' episode on April 28. The episode featured the Battle of Winterfell, which was filmed in Northern Ireland over a grueling 55 nights.