A 'Black Friday' ad that featured a man in blackface run by Smyths Homevalue last November has been found to be in breach of the Advertising Standards for Authority of Ireland's rules. 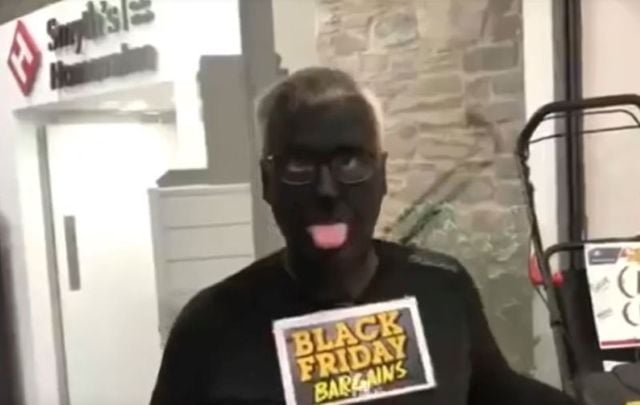 Smyths Homevalue's advertisement was in breach of the ASAI's rules. ODN / YouTube

An official complaint lodged against Smyths Homevalue store in Co Wexford has been upheld by the Advertising Standards Authority for Ireland.

Read More: Growing up in Ireland with the Black and White Minstrels, Uncle Tom and blackface

In November, Smyths Homevalue shared an advertisement on their Facebook page that featured the shop’s owner with his face and hands painted black ahead of the shop's Black Friday sales.

While the video was taken down from the shop’s Facebook page in less than a day, The Irish Sun reports on the dialogue used in the spot: "We're just getting dressed up because it's Black Friday weekend and we always have deals and deals - but I've pushed to boat out on this one."

ODN captured part of the video before it was removed:

One comment on Smyths Homevalue's Facebook page calls out the shop for removing the ad so quickly:

An official complaint was lodged with the Advertising Standards Authority for Ireland (ASAI) which said: “The complainant considered the advertisement was racist and that the advertisers was selling goods using racism.”

In their official response to the complaint that was lodged, the shop said: “the premise of the video was to celebrate Ireland’s very recent and historic win over the New Zealand rugby team, named the All Blacks, while also linking it to Black Friday. They said this was portrayed by the store owner dressing entirely in a New Zealand All Blacks playing kit and painting his body with black body paint. They said this was brought to life further by the store owner attempting one element of the renowned New Zealand ‘Haka’ ceremonial dance, namely the ‘whetero’ routine, which is where the participant exposes their tongue.”

Now, the ASAI has upheld the complaint, saying: “The Committee noted that the advertisers had not intended to impersonate nor insult anyone.”

“They considered, however, that the application of face paint to completely change an individual’s complexion without context could give rise to concerns of racism. The Committee considered that the advertisement had not been responsive to the diversity in Irish society and that it had breached Section 3.17, 3.19 (b) and (c).”

Do you agree or disagree with the ASAI's official ruling? Let us know in the comments