The sister of John Heneghan said this was no "accident" it was an "avoidable tragedy". 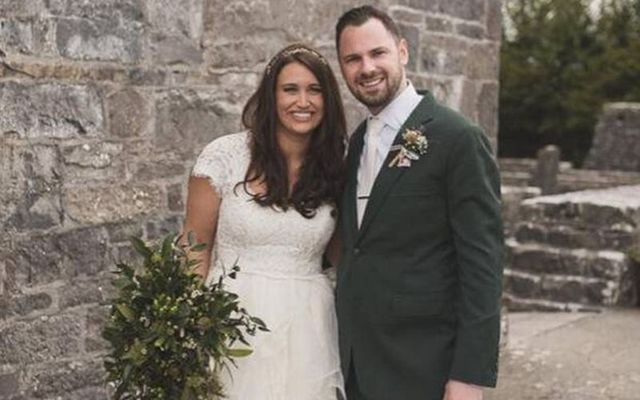 Caitlyn Holtzman and John Heneghan on their wedding day.

The sister of John Heneghan who was killed along with wife, Caitlyn Holtzman, when a man two-times over the legal blood alcohol level plowed into their car, said this was no "accident" it was an "avoidable tragedy".

Dickie Winn was sentenced to serve up to 19 years in state prison on Thursday (Nov 21), at Saratoga County Court, in New York, by Judge James Murphy. On May 25, 2019, Winn, who was two-times over the legal blood-alcohol level to drive, crashed his truck into a car while illegally crossing an intersection. He killed John Heneghan (33), from Mayo, his wife Caitlyn Holtzman (32), and left their three passengers with life-changing injuries.

Winn (59), from Cohoes, Albany, New York, was sentenced by Judge James Murphy having pleaded guilty to one count of aggravated vehicular homicide, a felony that takes into account the deaths of both people killed.

The sentencing hearing at Saratoga County Court was the first opportunity for the victim's families and friends to address Winn directly. Their testimonies lasted over one hour.

Among those who testified was Mary O'Reilly, the elder sister of Heneghan, the 33-year-old, driver of the Cadillac. The Mayo woman told the court "John and Caitlyn did not die in an accident. We did not lose a brother and a son. He was taken from us," she said.

She insisted that the crash was not a mistake but an "avoidable tragedy." the Daily Gazette reports.

She described Heneghan as the light in their lives, who always had a joke or story to tell or a word of friendly advice to give. O'Reilly told the court that the crash had stolen her family of the opportunity to have many more of those experiences, and to hear more of those stories from her brother.

"And now there are no more. No more of anything, ever," she said.

O'Reilly said that Winn's guilty plea did nothing to alleviate her family's pain.

She ended her statement by saying:

"We have no warm words of compassion for Mr. Winn."

Caitlyn Holtzman's mother, Claudia, also gave a victim impact statement. Through tears, she said "The world looks different now. Sometimes I think that happiness is over for me."

Both of Caitlyn's parents gave lengthy and tearful testimonies. They condemned Winn for taking their only daughter and denying them the chance for future grandchildren with her. They also announced that since their daughter's death they have raised $13k for a non-profit organization Mothers Against Drunk Driving.

Her mother implored him to be open and honest about his crime in the hopes that her daughter's death might keep a similar situation from happening to someone else.

She said "Can I forgive you? I think I can, and I think God can.

Donald Holtzman said "I saw the world more fully through her eyes...  never go more than a minute or two without thinking about my Cait ... I miss her so."

Also testifying were Heneghan and Holtzman's friends who were sitting in the back of the car when it was hit. The five friends had been en route to a wedding. The three friends who survived suffered life-changing injuries.

Two of them, Julie Staples (24) and Luke O'Doherty (25), both from New York City, detailed the horror they had suffered since the incident - losing their friends, mounting medical bills, series injury and the uncertainty as to whether they will ever again lead normal lives.

Staples has only recently been able to remasting holding a fork to eat and getting in and out of bed. She described her situation as "incredibly preventable".

She said "I see this as a deeply selfish crime."

O'Doherty has had to relearn how to walk after the crash. He said the incident has affected him mentally in that his mind can jump to enjoying time with his friends to being dragged from the wreckage of Heneghan's car.

He said "We shouldn't feel lucky to be alive. This shouldn't have happened."

The accused, Winn (59) who served the US military for 30 years, did not make a statement in court. However, he frequently nodded his head during the testimonies.

Having heard the testimonies, Judge Murphy, told Heneghan and Holtzman's family and friends and while the court would be to hold Winn responsible for his crimes they could not eliminate their grief.

"Nothing I say will ever bring back your daughter, Caitlyn, or John," he said.

Speaking to Winn he said that while he believes he is remorseful his actions were criminal and irreversible. He said that his sentence is fitting and called on the accused to also pay restitution of $3,376 in medical bills.

"You need to serve as much of that sentence as is possible. There is no excuse for this conduct," Murphy said.

"You drove drunk on that day and killed two people."