Mayo man John John Heneghan and his American wife Caitlin Holtzman were killed in a crash involving a drunk driver on May 25. 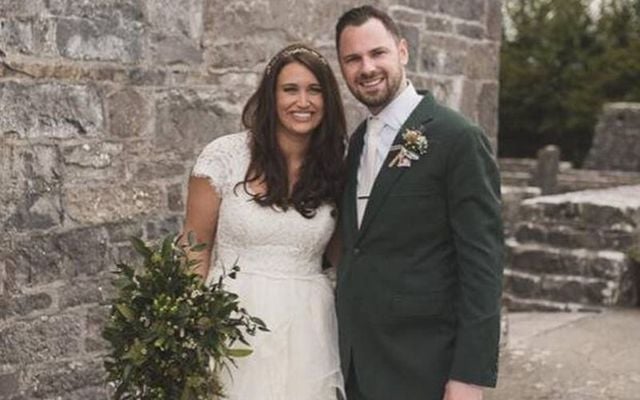 Caitlin Holtzman and John Heneghan on their wedding day: The couple were killed in a fatal road crash on May 25. Family's Own / Rip.ie

Mayo man John John Heneghan and his American wife Caitlin Holtzman were killed in a crash involving a drunk driver on May 25.

Tributes have been paid to Irish native John John Heneghan and wife Caitlin Holtzman in a heartbreaking memorial to the couple in Co Mayo.

Irish immigrant Heneghan, 33, and his American wife Holtzman, 32, were killed when their car was struck by an alleged drunk driver near Albany, New York, on Saturday, May 25. Three other passengers were also badly injured.

The drunk driver who killed the couple was shown to have twice the legal limit of alcohol in his blood.

The couple's "heartbreaking end" was remembered at a memorial in Mayo on Sunday ahead of a private burial in Tourmakeady on Monday.

Caitlin Holtzman and John Heneghan, killed in a fatal road crash on May 25. (Via: Facebook).

Read more: Drunk driver who killed Irishman in NY had twice the legal limit of alcohol in his blood

"While it breaks our hearts to lose JohnJohn so unexpectedly, that he was living his dream, that he was happy, that he was in love and so deeply loved in return, that they are now together forever," said Heneghan's sister Maire Ivanna O'Reilly in the eulogy, according to The Irish Independent, adding that  it was a "heartbreaking end" to their "love story."

"Caitlin was JohnJohn's treasure, of that I am sure," O'Reilly continued. "They were beautiful people in their own right but together they were really a beautiful couple.

"Their sparkling eyes, their bright smiles, their warmth, their love, their charisma. The energy they possessed and exuded became inextinguishable."

John Heneghan and Caitlin Holtzman on their wedding day in Mayo in 2015. Image: Facebook.

Heneghan had moved to the US nine years ago, working in construction. The Mayo man had recently lost his mother at the time and was inspired by the book she gave him as a young boy, "The Alchemist," to change his life. He followed the path of the book's central character Santiago in traveling to a far away land in search of his dream, and in America, he found it, in the form of Holtzman.

The owner of her own media company, Holtzman met the Irish man in a bar as they were both celebrating St Patrick's Day. They wed in Mayo in 2015, moving back to Manhattan to be together. They were traveling to attend a wedding with friends when their lives were tragically cut short in the fatal car crash.

During the touching tribute, Heneghan's sister thanked the couple for allowing them all into their love story, also extending thanks to Holtzman's parents for allowing their daughter to be buried with her husband in Ireland.