"Sinn Féin could be involved here," one conservative councillor said after Royal Mail post boxes in his area in England were painted green. 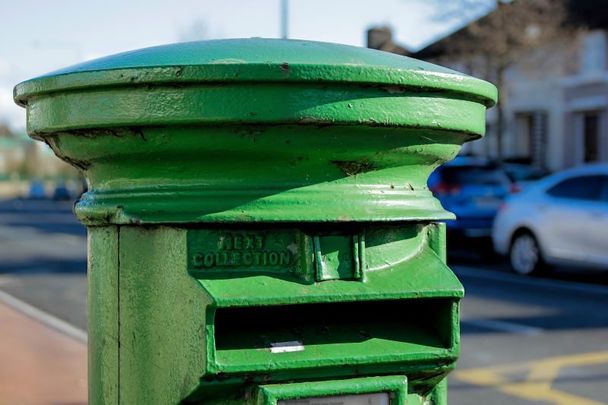 Several red Royal Mail post boxes have been mysteriously painted green in the West Yorkshire area of England, leading at least one politician to believe there is an Irish political element to the vandalism.

"I am astonished by what has happened but it seems that someone involved in Sinn Féin could be involved here," Bernard McGuin, a Conservative Councillor in the local area, told Yorkshire Live on Monday.

"This is news to us," a spokesman for Sinn Féin, the Irish nationalist party that became the largest party in Northern Ireland for the first time ever in the region's recent elections, has since told The Irish News.

Several post boxes had been painted apple-green in the Fenay Bridge/Lepton area on Saturday, with a further greening reported on Sunday. Initially, locals thought the paint jobs were linked to the Green Party, but a spokesperson has denied any involvement.

McGuin earlier told Yorkshire Live: "Although I have Irish heritage, I think the Royal Mail colours should be green. Residents consider what has been done as vandalism.

"Hopefully the boxes will be returned to the red of tradition. I hope we have an answer from Royal Mail about what is going on. As a dour Yorkshire Conservative, I miss the red ones."

A spokesperson for Royal Mail said: "We do not know who repainted these postboxes, and are reporting this matter to the police. We will be repainting the boxes in the iconic red as soon as possible."

Interestingly enough, McGuin's Sinn Féin theory might not be totally baseless. Back in 2008, the party's youth wing launched a campaign that saw 50 post boxes in Northern Ireland painted green.

A spokesperson for Ógra Shinn Féin said at the time: "Activists have been engaged in the greening of post boxes across the north in the previous week, to assert proudly and very visibly that we live in Ireland, and our post boxes should be green."

The spokesperson added: "This is a practical manifestation of the All Ireland agenda, a novel way in which young nationally minded people can promote their Irishness and highlight the folly of partition. The young people involved in these actions are simply providing a public service and should be applauded for saving 'An Post' a job of work when we achieve Irish unity."

Anthony Trollope, an English novelist and postal surveyor, is credited with introducing post boxes to Ireland in the mid-1800s when the country was still under British rule.

According to Dublin City Public Libraries, most of the early pillar boxes were painted dark bronze green throughout the United Kingdom, but in 1874, the Post Office decided to make pillar boxes more obvious by painting them a striking royal red.

"The boxes in all their vivid redness were a potent and ubiquitous symbol of British rule in Ireland," the Irish Times noted in 2017.

In 1922, when Ireland achieved independence from Britain, Irish post boxes got their green makeovers - which amounted to green paint jobs to cover up the red.

In 2016, some Irish post boxes were briefly re-painted red as part of  An Post’s “GPO Witness History” campaign marking the centenary of the 1916 Easter Rising.