Sinéad Lyons and her dog Flossie have been missing since March 11. Police believe they are in Massachusetts or New Hampshire. 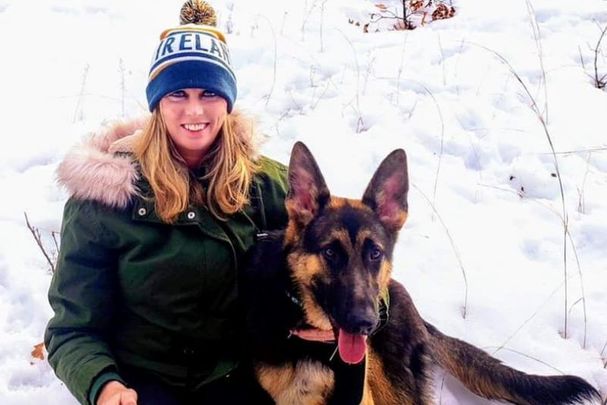 Sinéad Lyons, 41, was last seen walking her dog, a German Shepherd named Flossie, in Lowell, Massachusetts on or about March 11.

Lowell Police said on March 14 that Lyons could also possibly be in the North Conway, New Hampshire area.

On March 15, Lyons' car, a white Volvo station wagon, was discovered parked in the Ossipee Lake area in Massachusetts.

On Facebook, Sinéad's sister Sandra has mounted an appeal for any information regarding the whereabouts of her older sister.

Sandra writes that Sinéad has "blonde hair, blue eyes, a slim build, 5’11 and speaks with an Irish accent."

In an update on March 22, Sandra wrote that her older sister "was last seen on March 11 wearing a white coat, white knit hat & black boots. Sinead was going to collect her dog Flossie a female, microchipped German Shepard dog.

"Sinéad left Lowell and travelled to collect Flossie from a friend in the NH [New Hampshire] area.

"She was going to go for a walk with Flossie before heading back home to Lowell.

"Her car was found parked near Ossipee Lake NH. Sinéad & Flossie haven’t been seen since."

Addressing her sister, Sandra said "our relatives finally made it through all of the red tape that stopped them from traveling to you from Ireland. They are there now, they will find you!"

"We ask those that go looking for Sinéad to please stay safe, make sure a loved one knows exactly where you are going."

My sister Sinéad and Flossie are still missing. My parents are asking for everyone to say a special prayer today, St...