Restaurants and gastropubs will reopen on December 4 as part of the Government's plan to exit Level 5 restrictions. 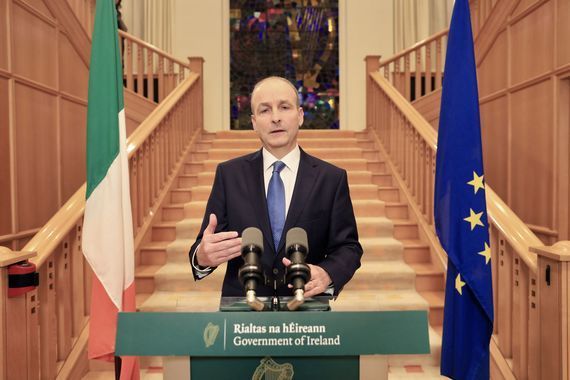 Taoiseach Micheál Martin when he announced the Level 5 restrictions in October. Rolling News

Taoiseach Micheál Martin has announced that non-essential retailers will open on Tuesday as part of the Irish Government's plans to exit Level 5 lockdown.

Martin announced that shops, gyms, religious services, museums, libraries, and barbers and hairdressers will reopen on Tuesday as Ireland moves to Level 3 on its Living with COVID plan on December 1.

The Taoiseach made the announcement on Friday after the cabinet agreed on a plan to exit the Level 5 restrictions that have been in place since October 22 by moving to Level 3 with some modifications.

Martin said that the measures are a "safe balance" between controlling the virus and meeting the social and economic needs of the country, ensuring that this Christmas would be a "special" one. However, he said that it would not be like previous Christmasses.

"This cannot and will not be the Christmas we are used to," he said.

Martin said that Ireland's six-week lockdown had been effective in fighting the spread of the coronavirus in Ireland, noting that Ireland now had the second-lowest infection rate in Europe. He also said that the virus had claimed the lives of more than 3,000 people on the island of Ireland and that the sacrifices people have made have paid tribute to everyone who has died from the virus.

Restaurants and pubs that serve food will be allowed to reopen on Monday, December 4, as part of the plan to exit Level 5, Martin announced.

The National Public Health Emergencies Team (NPHET) had reportedly advised against reopening pubs and restaurants over Christmas, but the Government will allow them to reopen with increased distances between tables and reduced the amount of time that customers can spend in an establishment.

The Government has decided to reopen restaurants and gastropubs on December 4 in order to allow businesses to operate for three full weeks during the busy Christmas period.

However, pubs that don't serve food from their own kitchen will not be permitted to reopen during December, Martin confirmed, while hotels will be permitted to open their restaurants to non-residents from December 4.

Martin said that the Government was trusting business owners and their customers to act responsibly through its decision to reopen restaurants and gastropubs.

Martin additionally announced that inter-county travel and household visits of up to three households will be permitted from December 18 until January 6 to allow families to reunite over the Christmas period.

The Taoiseach additionally advised people to wear face coverings in crowded outdoor areas over the festive period in addition to wearing them in places of worship.

Numerous media outlets report that Government ministers were aware of the risk they were taking by agreeing to ease COVID-19 restriction but that they considered a range of factors and not just the risk of increasing the spread of the coronavirus.