Militant faction, who deny responsibility for the death of Irish solder, hand over the man described as the main suspect. 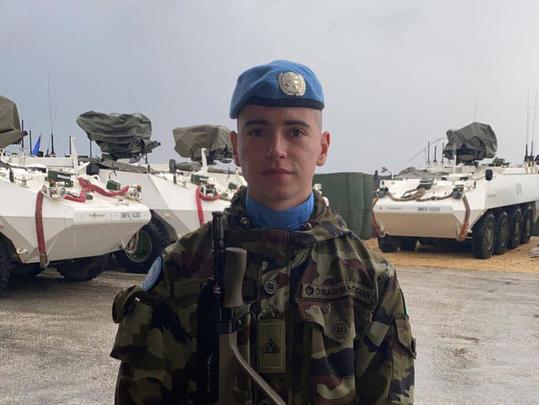 Sean Rooney (23) an Irish peacekeeper from Listowel, County Donegal, was killed on Dec 14 in the Lebannon.

Following the death of an Irish soldier, Sean Rooney, and the serious injury of one other, Hezbollah has handed over a man they claim is the main suspect in the attack on a United Nations Interim Force In Lebanon peacekeeping vehicles.

Private Sean Rooney, an Irish peacekeeper, part of the United Nations Interim Force In Lebanon was killed on Dec 14 when his vehicle was attacked. Trooper Shane Kearney, also Irish, was also seriously injured.

The incident took in the village of al-Aqbieh, in southern Lebanon. Hezbollah, the militant faction influential in southern Lebanon, denied any involvement in the attack and has now handed over a man they describe as the main suspect, the AFP reports.

"The main shooter has been arrested by security forces after Hezbollah handed him over hours ago," the security official said. They declined to be identified because they were not authorized to speak to the media.

The RTE reports that "it was not immediately clear if the individual arrested was a member of the group."

Following the attack, three investigations have been launched by the United Nations, the Irish Defence Forces, and Lebanese authorities.

In the wake of the incident, the Lebanese officials had told the Irish Times that their investigations were making progress. Lebanon’s ambassador to the UK and Ireland Rami Mortada said “I think things are going in a very promising direction that won’t be too long before we hear some good news."

According to reports, Hezbollah is cooperating with Lebanese military intelligence.

This week, a judicial official said Lebanese investigators had identified suspects in the attack, adding that there were "at least two" shooters.

The AFP source said that the attack on the peacekeeping UN vehicle was "premeditated".

While Hezbollah has denied involvement,  their Security Chief Wafic Safa described the killing as "unintentional".

The Times of Israel reports that the vehicle Rooney was traveling in was attacked in the al-Aqbiya area, which is just outside the UNIFIL's area of operations.

The vehicle was traveling along a coastal road not usually used by UNIFIL forces when it was blocked by villagers.

The publication reports that seven bullets penetrated the vehicle, including one that fatally wounded Rooney.

Trooper Shane Kearney, 23, suffered blunt-force trauma to the head during the attack and remains in a critical but stable condition in the hospital.

Two other soldiers were also injured in the attack, although their injuries are not believed to be serious.