Private Seán Rooney, 24, was described as a "national hero" during a military funeral at the Church of the Holy Family in Dundalk. 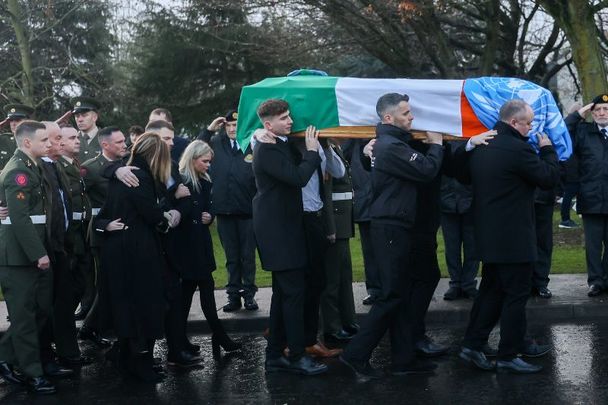 December 22, 2022: Mourners and members of the Defence Forces as the coffin of Pte Seán Rooney is carried to Holy Family Church, Dundalk. RollingNews.ie

Private Seán Rooney, an Irish soldier who was killed in an ambush while on UN peacekeeping duty in Lebanon, has been laid to rest following a funeral service in Dundalk on Thursday.

Rooney, 24, was described as a "national hero" during a military funeral at the Church of the Holy Family in Dundalk, Co Louth this morning, December 22.

Hundreds of people lined the streets of Dundalk as Rooney's remains were brought to the church from his grandparents' house by hearse.

His coffin, which was draped in the Irish tricolor, was then taken to All Saints Catholic Church, Colehill, in his native Co Donegal for a burial service at 3:30 pm.

Rooney's family was present during Thursday morning's funeral service, including his parents Paul and Natasha, fiancée Holly, grandparents Eugene and Rachel, and his grandmother Ann McClusky.

"No one in this community would ever have thought that your walk across Hoey's Lane to come to your beloved church would be such a difficult walk," Fr. Ryan said.

"And I know it wasn't easy to leave the house this morning to make the journey. It was not easy.

"It’s not talked about a lot, but families who have sons and daughters serving abroad, they know the risks and dangers that are always present in regions of conflict. Peacebuilding will always be a risky business. We call them peacekeeping missions but sometimes, they can be far from peaceful.

"It breaks the human heart when a loved one dies serving their country for the important work of peacebuilding."

In a message to Rooney that was read out by Fr. Ryan, his fiancée Holly said Rooney would have made a "fantastic husband and an even better father".

"I am absolutely heartbroken that our life together has been cut short, but I feel extremely lucky to have experienced a person and love. Some people don’t ever have the opportunity to love and be loved in the way that Seán and I did, so I feel absolutely honored that I have been afforded three wonderful years with him," Holly said in a letter to Rooney.

His mother Natasha spoke at the service, stating that words were not enough to express the love she had for her son.

"Seán was placed in my arms when I was 16 and he gave me purpose," Natasha told the funeral service.

"In his life, he gave me purpose. In his death, I will find new purpose. I promise my son I will stay strong to take care of Robyn (Rooney's sister)".

She added: “He is a national hero, I am proud of him … I am proud of the kind and loving person Seán was. I will love you forever son".

Rooney was fatally shot during an ambush in southern Lebanon on Wednesday, December 14.

Three separate investigations are being conducted into the incident by the UN Interim Force in Lebanon, Lebanese authorities led by a military prosecutor, and the Irish Defence Forces, BBC reported on Thursday.

Meanwhile, a judicial official told AFP on Thursday that Lebanese investigators have reportedly identified suspects in Rooney's death but no arrests have yet been made.

The source said the incident "was premeditated and the patrol was surveilled and followed by a car carrying armed men".

Óglaigh na hÉireann can confirm the name of the the soldier killed on active service whilst serving in UNIFIL this morning.

869674 Private Seán Rooney, a member of the 27 Infantry Battalion and a native of Newtwoncunningham, Co Donegal.

Trooper Shane Kearney, 23, was seriously injured in the attack and suffered blunt-force trauma to the head. He remained in critical condition in a hospital in Sidon for a week before being transported back to Ireland on board a special medical aircraft.

He landed at Casement Aerodrome in Baldonnell on Wednesday morning and will continue to receive treatment in Beaumont Hospital.

He will then be taken by ambulance to Beaumont Hospital to continue receiving treatment.

Two other Irish peacekeepers were injured in last week's attack, although their injuries are not thought to be serious.