Body of Irish soldier killed in Lebanon repatriated to Ireland

The body of Irish soldier Private Seán Rooney has arrived in Ireland after traveling overnight from Lebanon where he was killed on December 14. 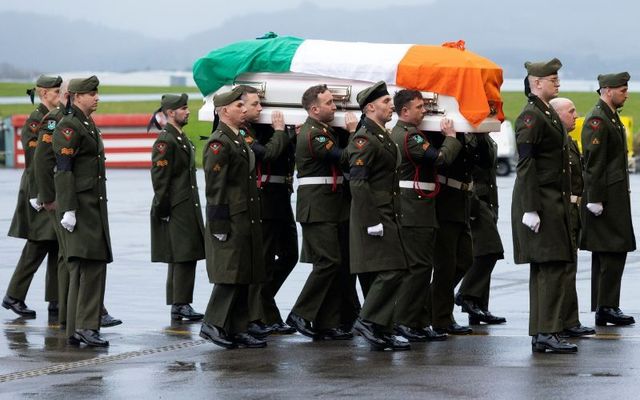 December 19, 2022: The Irish Defence Forces carry the coffin of Pte Seán Rooney on the repatriation to Casement Aerodrome, Baldonnel. RollingNews.ie

Seán Rooney, 24, a UN peacekeeper, was shot and killed when the armored vehicle he was traveling in was attacked in a coastal village in southern Lebanon on December 14.

A number of his colleagues from the 121st Infantry Battalion accompanied his coffin on the flight, including his company commander Commandant Brian Connolly.

With the @UNIFIL_ flag removed,
the body of Private Seán Rooney is carried by his comrades to the @defenceforces plane which will repatriate him from Lebanon to Ireland @rtenews pic.twitter.com/uv5Ke7YKPB

Rooney's mother Natasha, grandfather Eugene, and fiancée Holly McConnellogue were among those present when the Air Corp CASA aircraft landed at Baldonnel on Monday morning.

Newly-appointed Tánaiste and Minister for Foreign Affairs Micheál Martin and Chief of Staff of the Defence Forces Lieutenant General Sean Clancy were also in attendance.

Rooney's coffin was draped in the Irish flag and carried by members of the 2nd Brigade Military Police Company, who are based in Cathal Brugha Barracks in Rathmines.

A post-mortem will now be carried out, with Rooney's funeral expected to take place later in the week.

Three separate investigations are also underway to determine what happened during the attack on December 14, which took place south of the Lebanese city of Sidon.

During a repatriation ceremony on Sunday night, Lebanese Army General Pierre Saab said his country's security agencies would do everything they could to reveal the truth about the attack.

He said anyone who is proven to be an aggressor toward the United Nations Interm Force in Lebanon (UNIFIL) will be punished. The United Nations peacekeeping force is overwhelmingly rejected by the Lebanese people.

The Irish Defence Forces are conducting their own investigation into the attack, with a team of three military police, a lawyer from Dublin, and a specialized team of gardaí taking charge of the investigation.

UNIFIL will also carry out an investigation into the attack.

The Times of Israel reports that the vehicle Rooney was traveling in was attacked in the al-Aqbiya area, which is just outside the UNIFIL's area of operations.

The vehicle was traveling along a coastal road not usually used by UNIFIL forces when it was blocked by villagers.

The publication reports that seven bullets penetrated the vehicle, including one that fatally wounded Rooney.

Trooper Shane Kearney, 23, suffered blunt-force trauma to the head during the attack and remains in a critical but stable condition in the hospital, according to Lieutenant Colonel Damien Murphy of the 121st Battalion.

Two other soldiers were also injured in the attack, although their injuries are not believed to be serious.