Irish soldier killed, another injured during peacekeeping mission in Lebanon

Private Seán Rooney has been killed, while Private Shane Kearney has been seriously injured on UN peacekeeping duty in Lebanon, the Irish Defence Forces said. 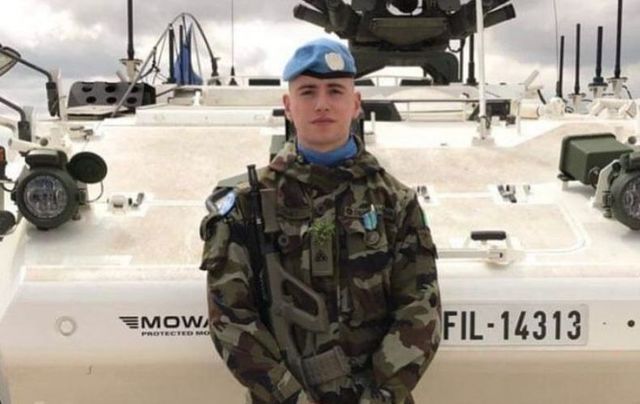 Private Seán Rooney was pronounced dead on arrival at Raee Hospital while Private Shane Kearney underwent surgery and is in serious condition.

Rooney, 23, was from Newtown Cunningham in Co Donegal, while Kearney, 22, is from Killeagh in East Cork.

Two armored vehicles carrying eight soldiers came under fire while traveling to the Lebanese capital of Beirut at about 9 pm on Wednesday, December 14.

The Irish Defence Forces said Rooney was pronounced dead on arrival at Raee Hospital, 43km outside Beirut, while Kearney underwent surgery and is in serious condition.

Rooney joined the Defence Forces in March 2019  and his home unit was the 27 Infantry Battalion in Dundalk.

Óglaigh na hÉireann can confirm the name of the the soldier killed on active service whilst serving in UNIFIL this morning.

869674 Private Seán Rooney, a member of the 27 Infantry Battalion and a native of Newtwoncunningham, Co Donegal.

Lieutenant General Seán Clancy, Chief of Staff of the Irish Defence Forces (Óglaigh na hÉireann), said in a statement that he is "deeply shocked and saddened" by the news.

"Our thoughts are with his family, his friends, and his fellow peacekeepers from the 121st Infantry Battalion," Clancy said in a statement.

"Our thoughts are also with those who were injured last night and their families and friends.

"We have one of our medical officers currently at Raee Hospital and we will ensure that our personnel get the best possible care."

"Essentially what happened, we think, was two armored personnel vehicles were traveling from our main camp in southern Lebanon to Beirut. It was a standard administrative run, as it's called in military terms," Coveney said.

"And the two armored vehicles effectively got separated. One of them got surrounded by a hostile mob - I think that's the only way you could describe them - and shots were fired and unfortunately, one of our peacekeepers was killed."

Coveney said he has visited Lebanon three times in the last two years and traveled on the same standard administrative run.

He said there had not been a Defence Forces fatality on a peacekeeping mission in more than two decades and added that Ireland and the UN will conduct an investigation into the incident.

I’m deeply saddened & shocked at the death of a young man serving #Ireland with #UN overseas. My deepest condolences to his family for their heartbreaking loss. We will do everything possible to support all impacted by this incident as full investigation begins. @IRLDeptDefence https://t.co/7eGNq3xwB4

President of Ireland Michael D. Higgins expressed his "deepest sorrow" to learn of the death of an Irish soldier in Lebanon, offering his condolences to the man's family, friends, and colleagues.

"As a people, we take great pride in our unbroken record of peacekeeping with the United Nations. However, we must never forget the dangers that come with this work, or how the members of our Defence Forces serving on peacekeeping missions abroad risk their lives every day in order to build and maintain peace in conflict zones across the world," Higgins said in a statement.

Taoiseach Micheál Martin also expressed his condolences in a statement on Twitter, adding that the incident is a reminder of the dangerous circumstances that the soldiers serve in.

"I want to express the heartfelt sorrow of the Government of Ireland at the loss of a young person serving overseas with the United Nations. In particular, I extend to his family our deepest sympathies for the terrible loss they have suffered," Martin said.

"It is a reminder that our peacekeepers serve in dangerous circumstances, at all times, in the cause of peace. Our thoughts are with his colleagues, wider Defence Forces family, and all who serve overseas."

It is with a deep sense of sadness and shock that I have learned of the death of one of our UNIFIL peacekeepers, and serious injuries to another, in an incident in Lebanon.