Sean Hughes, 27, had been fighting for his life in the US since falling from a scaffolding while at work in Philadelphia last Decemeber. 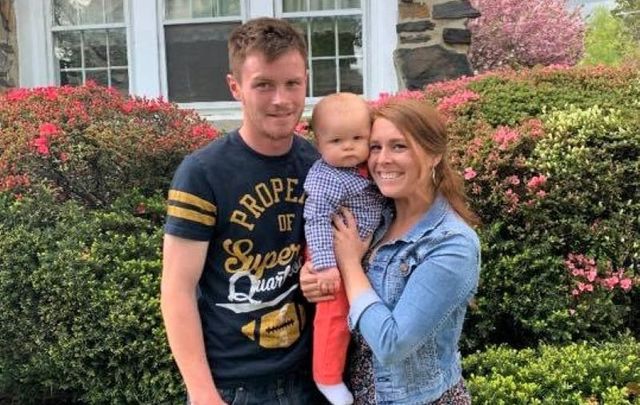 Sean Hughes with his wife Emily and their son Sean. Sean Hughes, Facebook

Sean Hughes, a native of Co Armagh, died peacefully in a hospital in Philadelphia six months after a tragic construction accident.

Hughes, 27, is remembered fondly as the "beloved husband of Emily and daddy of Sean-Paul" in a notice shared on FuneralTimes.

Funeral arrangements have yet to be published, but the Belfast Telegraph reports that Hughes' family is working with the Kevin Bell Repatriation Trust to bring Hughes home to his native Co Armagh.

Hughes, who had been living in Philadelphia for five years with his wife Emily and their baby son, had been fighting for his life in an induced coma since falling from scaffolding on December 11, 2020.

In the wake of the accident, two GoFundMe campaigns were launched to support Hughes and his family - one by the Young Ireland’s Gaelic Football Club, to benefit Sean's wife Emily, and another by Hughes' sister Noleen to benefit his mother Majella Hughes and the family's travel expenses.

In the latest update shared on April 23, Noleen Hughes said that her brother was in rehab in the US and was "making some good improvements," including being able to open one of his eyes slightly and the ability to follow commands and recognize voices.

"Unfortunately that all came to a standstill as he took fluid on the brain and was taken back to Christiana hospital in Delaware. Here he was treated for infection and had a permanent shunt put in to drain away the fluid from his brain.

"Sean, being the strong, stubborn, and much-loved man he is, has fought back once again and is now back in rehab doing his best to pick up where he left off. He is a legend of a man with a strong heart who continues to make progress even with all that is thrown at him."

With their US visas ending, Hughes' family had to return to Ireland but intended to return.

On June 12, Young Ireland's Philly GAA club, who Hughes played for while living in Philadelphia, announced the passing of Hughes on their Facebook page. The GAA club had been regularly requesting its members to offer prayers for Hughes.

"It is with great sadness and heavy hearts that we announce the passing of Sean Hughes," the club wrote on Facebook.

"We ask that you continue to keep Sean, Emily, baby Sean, and their families in your thoughts and prayers during this difficult time.

"We are a club in mourning today as our good friend and player Sean Hughes has passed."

It is with great sadness and heavy hearts that we announce the passing of Sean Hughes. We ask that you continue to...

Hughes played for Pearse Óg's GAA club in Armagh before emigrating to the US and the Armagh club also paid tribute to their former player.

"Seán was a brilliant wee footballer, a real team player, and blessed with natural ability. Like many an Ógs player before him, he had emigrated to America for work.

"These last few months all at Pearse Óg had been praying for his full recovery and are truly devastated by this sad news. We wish to extend our sympathy and condolences to his wife Emily and to their son Seán Paul, his parents Paul and Majella Hughes, his brothers Eoin, Ciaran, and Darragh, and also to the wide family circle."

Seán Hughes RIP. Na Piarsaigh Óga committee and members are saddened to learn of the passing of our former Senior...