Irish woman Sara Hartigan sprang to action when Dean Herewini lost consciousness after his heart stopped while driving outside of the Ireland - New Zealand rugby match in Auckland on July 2. 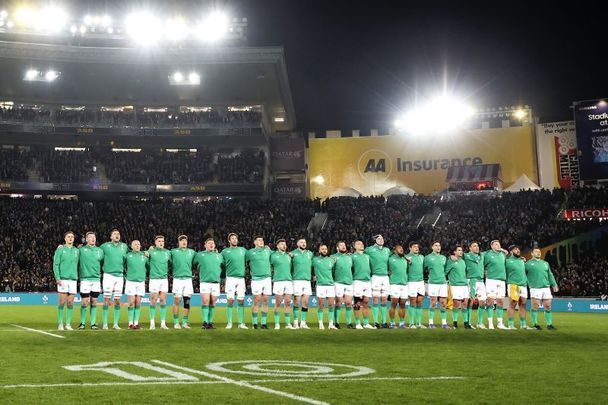 July 2, 2022: Ireland sing the national anthem during the International test match in the series between the New Zealand All Blacks and Ireland at Eden Park in Auckland, New Zealand. Getty Images

Irish woman Sara Hartigan is rightly being praised as a hero after helping save Dean Herewini's life ahead of the Ireland - All Blacks rugby test match at Eden Park in Auckland, New Zealand on Saturday, July 2.

Herewini, a development officer with Waikato rugby union, was driving into the parking lot ahead of the match when his heart stopped. He managed to pull into a parking spot, but clipped another car and struck five more cars while in distress.

Herewini's daughter Kea, who was in the car with him, panicked and phoned her uncle Phil, Dean’s twin brother. The commotion in the car park drew the attention of bystanders, including Co Limerick woman Hartigan, who is leading a tour of Irish rugby fans around New Zealand.

"I didn't know what was going on,” Hartigan told the New Zealand Herald. “His daughter was obviously very upset and crying and calling for help.

"It just happened so fast. People were calling an ambulance but no one was going in and helping Deano. It was just weird."

Hartigan, who has lifeguard training, sprang to action and began performing CPR on Dean.

"We were trying to get the seat back,” she recounted. “I couldn't tell you how long it took but the sweat was pouring off me.

"I was calling out, 'Can you hear me, come back to us,' like you see in the movies.

"Then he took a massive big breath and just woke up."

Dean’s brother Phil eventually made it to the car park and Dean was transported to Auckland City Hospital. Phil was only able to briefly meet with Hartigan at the scene of the incident but was able to later trace her down with the help of the Auckland Irish Club group on Facebook.

"We're very lucky that someone like that just jumped into it and did what she did,” Phil told the New Zealand Herald.

"It could have ended up a little bit messy.

"You read about these things. You see them on TV but when you experience it first-hand it's incredible.

"We're so humble and grateful."

Hartigan told Newstalk Breakfast on Wednesday: “The last week has been pretty overwhelming because I’m not one to be standing up going, oh look at me – I wouldn’t be looking to get any credit for this or anything.

“The most important thing is bringing awareness to how important this is. Even the basics can save a life. You don’t need to know a whole amount about CPR to help.

“I know the percentage of people surviving outside a hospital is pretty low, but this just proves that it can be done. That basic compressions on a chest can get somebody back to get them to the right place where they can be looked after.

“So, it’s just the best feeling and I have friends for life now so it is amazing.”