Irish woman Katie Taylor, the undisputed queen of boxing, remains down to earth even after her historic win at New York City's Madison Square Garden. 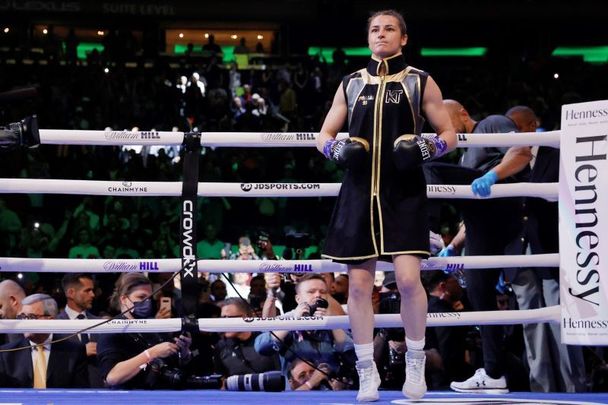 April 30, 2022: Irish boxer Katie Taylor appeared calm, cool, and collected as she took to the ring ahead of her history-making fight against Amanda Serrano at Madison Square Garden in New York City. Getty Images

Katie Taylor is one of the world’s top sporting attractions after her absolutely thrilling win in a packed Madison Square Garden on Saturday night, but don’t expect her to go all Conor McGregor on us.

The 35-year-old queen of women’s boxing, a native of Co Wicklow who now lives in a rural part of Connecticut not far from her trainer, is quiet, down to earth, and seems to have an aversion to celeb-style flash.

Given that Katie and her more than worthy opponent Amanda Serrano made history at New York City's Madison Square Garden with the first-ever female headline boxing bout, the spotlight will shine brighter in the weeks ahead as a rematch at Croke Park in Dublin looms. But Taylor is one cool customer.

A night to stir the soul! Humbled by all the support at @TheGarden. A special fight on a special night. 💚 pic.twitter.com/gigYeP7Qbr

What’s the question she hates being asked during interviews? If she’s got a partner, of course.

"Probably the question about relationships. That’s another question people always ask. I guess people are just interested in my personal life,” she recently told TheAthletic.com.

"I get it all the time. It’s a bit annoying at times but I’m just polite and get on with it. I don’t think male boxers get asked it, though."

Back in 2019, she told the Irish Mirror she wasn’t seeing anyone because she didn’t have the time. Whether that is still the case? That’s for Katie to decide if we should know.

A  funny story from 2017 perfectly illustrates how Katie doesn’t get star-struck. She was fighting at Principality Stadium in Wales and had an offer most would jump at – fellow Irish star Colin Farrell offered to walk her into the ring. Colin was in attendance with his then-girlfriend and went backstage to meet with Katie before the fight.

"It was great, meeting Colin, an absolute gentleman,” she told the Irish Independent after the match.

Katie’s mom Bridget shared some touching moments with her daughter after the fight. It’s all about family first for the humble star, who did the Irish so proud on the greatest stage of all.

"Family First, Always" From Bray to Madison Square Garden, @KatieTaylor and her mother Bridget have taken every step on the journey together ❤️ (📸 @Gary_Carr_) pic.twitter.com/A3qNyxYHtR