DUP MP Sammy Wilson was photographed not wearing a mask on the London Underground, an offense that carries a £200 fine. 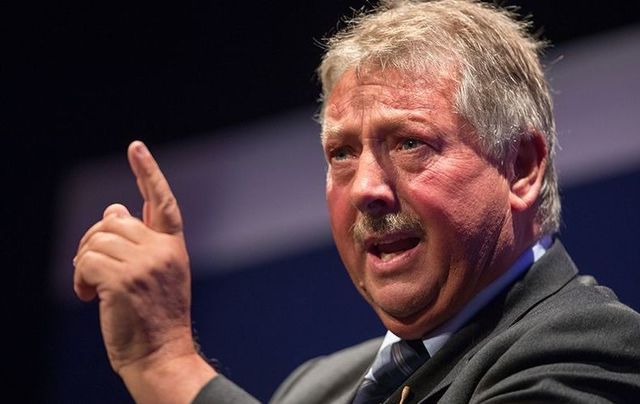 Sammy Wilson was photographed on the London Underground without a mask on Thursday morning. Getty Images

Sammy Wilson, a DUP MP for East Antrim in Northern Ireland, was photographed not wearing a mask while riding the London Underground on Thursday.

The picture of Wilson, which was shared on Twitter on Thursday and has gained more than 3.3 thousand likes, has drawn criticism as not wearing a mask on London transportation carries a £200 fine.

@duponline @BelTel Sammy Wilson MP on tube in London this morning with no mask after a £200 fine announced earlier this week. Disgrace. Rules not apply to MPs?? pic.twitter.com/Whx5FPDy9L

Speaking with The Belfast Telegraph, who was tagged in the original tweet, Wilson said that he had been wearing a mask throughout his journey, but only removed it to speak on the phone.

"There were others in the carriage not wearing a mask," Wilson noted.

The man who tweeted the photograph, who asked not to be named, told the BBC that Wilson boarded the tube at Westminster bound for Heathrow at about 8:30 am on September 24. The man, who sat across from Wilson, alleges that Wilson did not wear a mask at all during the journey.

In a separate statement to The Press Association, Wilson said: “I didn’t have a mask on, should have had it on and am offering no excuse, but it is sad that we have now become like East Germany under the Stasi where members of the public think it is acceptable to act as snoops.

“Whoever took the picture didn’t approach me or say anything to me which I suppose would have been the proper way to behave.”

In a press briefing on Thursday, DUP leader Arlene Foster said responding to a question about the incident: "I lead the Executive, therefore I am saying, very clearly, that everyone is subject to the law and everybody is equal under the law, and therefore it is very important that we listen to the laws and abide by them."