Ryan Linneman was discovered a week after his car crashed into a gully off of a Missouri highway. 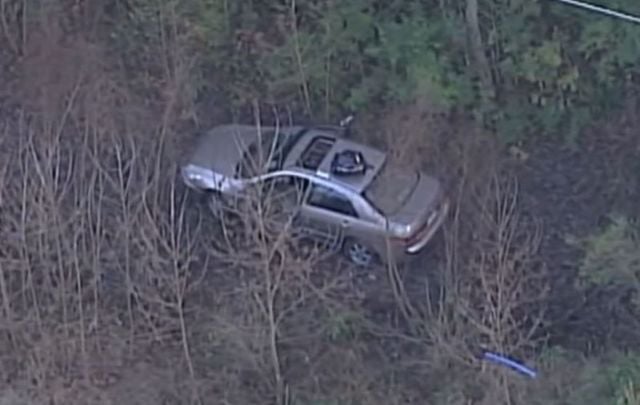 Ryan Linneman's car was not visible to the motorists passing by on the nearby highway. KCTV5, YouTube

Irish American Ryan Linneman, 37, was miraculously discovered by a passerby a week after he lost control of his car and crashed into a gully in Missouri.

Local CBS news station KCTV5 says that Linneman, a married father of three, was reported missing on October 9 by his concerned wife.

Police attempted to locate Linneman by tracking his debit card, license plate, cellphone, and social media, but came up with nothing and turned to the public for help.

On October 16, more than a week after his crash, Linneman was discovered in his wrecked vehicle by a man who was riding a dirt bike in the area. Linneman’s car wasn’t visible by passing motorists on the nearby highway.

KCTV5 says that Linneman’s car “went down a hill on I-470, went through the grass, went up on a dirt mound, and then continued into a deep ravine.”

Police are still attempting to piece together a definitive timeline of his crash, which no one has come forward as a witness to.

Sergeant Bill Mahoney said that the man who discovered Linneman’s car “thought it was an abandoned car.”

“It was down under some pretty heavy brush and, when he checked it, he found the individual and his first thought was that he was dead is what he told us.”

Rescue services transported Linneman from the scene to a local hospital where he is unconscious and in critical condition. He not yet able to speak to tell his version of what happened.

"We think he was injured by the crash, and he couldn't get out of the car, couldn't really help himself," Mahoney said. "Had that dirt biker not come upon him, I don't see how anyone would have found him."

Sgt. Mahoney added: “To say it was fortunate for him that that biker came by as a big understatement.”

KCTV shared this video of the scene not long after Linneman was discovered:

On October 17, Lee's Summit Police Department shared an update that Linneman had been found:

The same day, Linneman’s sister-in-law said in a public Facebook post: "We are blessed to be able to say that he is alive. However he is dealing with multiple medical issues that will take some time for the doctors to assess and determine the extent of his injuries.

"We thank each and every one of you who have prayed and shared the missing person report. We do ask that you refrain at this time from trying to contact the family for further information at this time, as we are still in the assessment stage and don’t have a lot of answers."